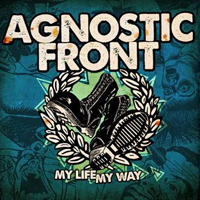 Roger Miret and pals are still standing, still relevant, and most of all, street-ready. That’s the main takeaway from My Life My Way, which is the band’s astounding 15th studio album, not counting a host of EP’s and splits. No real surprises here – it’s a mixed batch of traditional hardcore songs with gang shouts, along with some metallic moments that have limited, but punchy range.

Teaming with noted death metal producer Erik Rutan (Morbid Angel, Hate Eternal) did little in terms of swaying the band from the hardcore/crossover approach. If anything, this is the fullest the band has ever sounded, a credit to Rutan and his emerging knob-twiddling abilities. Miret and his imitable vocals have always been somewhat of an acquired taste (his enunciation can be a little harry at times), but that doesn’t stop from him rallying the HC troops for some shouts (and sweaty pile-ons) on the title track and “Self Pride.” And of course, a preponderance of me-against-world and cries for unity serve as the lyrical foundation.

The aforementioned bursts of metal don’t happen very often, only making an appearance during the opening strands of “That’s Life” and “The Sacrifice,” which takes some cues from their NYC hardcore allies in Madball. For the most part, punk-infused hardcore keeps the chains moving here, with standouts including opener “City Street,” “Us Against the World” and “Your Own Worst Enemy.”

Now in the hardcore game for over 30 years, Miret and Agnostic Front remain one of the scene’s true go-to bands. They’ve essentially mastered the hardcore punk sound, and on My Life My Way sound as tenacious as ever. Plus, sweaty pile-ons and gang shouts are always a good time. 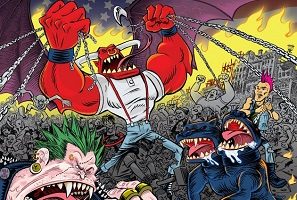