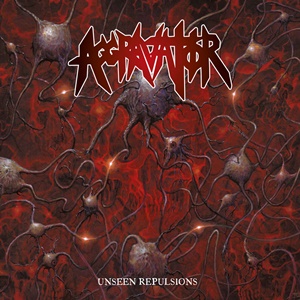 Together for thirteen years, Texas thrashers Aggravator aren’t exactly newcomers to the scene. Releasing a demo, two full-lengths and two EP’s previous to their latest product Unseen Repulsions, it’s obvious that they are establishing a following beyond the confines of their home state – traveling to festivals in Norway, Sweden, and Illinois beyond small tours of the West Coast and Scandinavia. When you’ve established credibility with a proven formula, it’s all about continuing to set the bar high in terms of songwriting, hooks, execution to package things in the most professional manner possible. That’s what you’ll hear through the latest six-song outing from this band.

The guitar play weaves an interesting amalgamation of standard heavy metal and thrash riffs, gaining influences from the UK/American side at times and the European scope on the other. The opening title track features everything from a lightning quick tom roll intro from Mike Cortes to menacing rabid guitars and venomous vocals as if Slayer and Kreator were racing to the finish line for thrash supremacy. From there you’ll get solid chops and frantic riffing – the music providing boundless energy as the hands fly up and down the fretboard, only relinquishing momentum in key spots for massive pit-wielding breaks, of which “Fragmented Reality” sets the table for some serious carnage when we get back to live shows. The up and down power chords from the Molly Hatchet cover of “Bounty Hunter” fit the outfit very well, proving that southern rock and metal have many parallels as far as presentation and emphasis on musicianship – just given a bit more of a dirty outlook through the gritty voice of guitarist Derek Jones. Whammy bar accents and furious note peeling from lead guitarist Austin Zettner can appear from the start, after verses, or in concluding moments – wherever necessary to amplify the intensity of the proceedings, check out “Searing Gas Decomposition” as evidence of what he brings to the table. Economical at twenty minutes and change, the mysterious cover also is a refreshing change from skulls or apocalyptic scenery.

Signing a fresh two-album deal with Empire Records, Aggravator are firing bullets at a scene craving for bands that can be aggressive, catchy, yet not recycle favorite riffs from the originators.