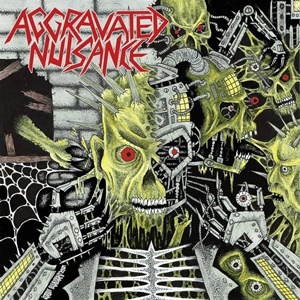 Crossover thrash hasn’t been relegated to an East Coast/West Coast impact stateside – it’s blossomed to Oklahoma as well, in part thanks to bands like Aggravated Nuisance. Starting in 2017, Deadly Forces is the group’s debut EP, a quick hitting seven song affair that whirls by in under fifteen minutes but features plenty of gang vocals, adrenaline-laced speed riffs, and relentless energy during the transitions that could gain appeal for the old school maniacs as much as the newer ones.

Drummer Kevin Bernardy propels through his fleet double kick and snappy snare hits, occasionally intertwining punk and blasting mechanisms against his normal heads down thrash propensities to carry “Radiation Meltdown” through a 94-second power charge. An equal affinity for acts like Municipal Waste and Gama Bomb appears as well as older influences like Nuclear Assault, D.R.I. or even early Sacred Reich when you check into the fierce intensity the vocals and music project through the speakers – even when a calm start occurs for the opening sequence of “Endless War”, the galloping guitar attack from Brian Carrigan soon levels any naysayers, sure to illicit unprovoked body launching or swinging hair windmills. As a singer Nick Cebalo tears his larynx to shreds – screaming with authority to carry “Intense Velocity” and “Living the Nightmare” as a clear meld of John Kevill and Tom Araya during their prime years. Certain arrangements call for brief mid-tempo respite, only to then assault at crossover thrash tendencies that Aggravated Nuisance favors – the leads proficient and shred-enhanced, while some of the lyrics tackle political/social worries relating to human eradication and world annihilation through toxic radiation.

Bonus points for an in your face production and the intoxicating illustration for the cover – bringing a mixture of thrash and traditional metal influences to mind (Eddie from Iron Maiden, anyone?). Deadly Forces achieves maximum sonic assault for thrash mavens – penetrating and worthy to check out.