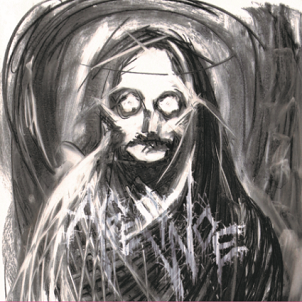 Let us refrain from making the usual predictable statement regarding Age of Woe’s Gothenburg, Sweden origins, for it serves no purpose and we may need to use it in a review of a lesser band. Ground Zero for melodic metal certainly means nothing to these gents, who have been kicking around since 2010 with an EP, full-length, and split to their credit prior to An Ill Wind Blowing, a lead weight bluster of Swedish sludge and d-beat.

Age of Woe is effective here not because of their well-intended adherence to the principles of death metal and brawny sludge, but because of the over-arch of darkness they stick on top of the album. It is perhaps a stringent doom element that gets in on the mix, or, because the Swedes don’t have an obvious punk side to them, but regardless of how one views it, the stinging “Bad Blood,” or “Heavy Clouds,” with its sudden Isis-like atmospheric interlude, give Age of Woe a noticeable edge. The album reaches its crest on “Havens Burn to Cinder,” a crashing, earth-shaking cut that combines ferocious-mode Cult of Luna with the melodic spirals of post-metal.

Reportedly recorded live with all men on deck in the studio, An Ill Wind Blowing catches Age of Woe’s sonic boom in stride, making them the approximation of the aforementioned Cult of Luna and Martyrdöd. Comparison aside, the girth and dark, heavy gust of An Ill Wind Blowing makes it rather the appropriate title, wouldn’t you say?