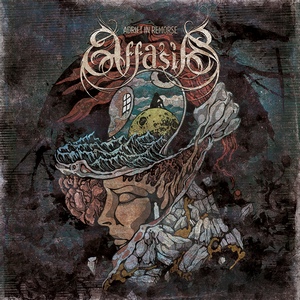 With the entire ‘blackgaze’ movement, it was only a matter of time before shoegaze elements started to trickle into other appropriate genres. Virginia’s Affasia apparently recognized the match with a doomier vibe, and their debut Adrift in Remorse effectively brings in some shoegaze elements into a darker and doomy sound. The result is an emotive one, and a pleasantly compelling album that balances heaviness and gloom.

A release that flirts more with atmosphere than you might expect, Adrift in Remorse has a dreamy quality that provides contrast from more traditional doom/death territory. An almost Katatonia-esque feel makes “Another Host” an absorbing listen from the start, as despondent vocals and almost droning guitars switch places with lower growls and chunky riffs. Plenty of room for melodies as well, at both ends of the spectrum. But the EP is definitely geared towards a more vocal-centered feeling, which does help to give it some breathing room in the doom sector. The very emotive cleans are a true highlight of the release, which have some great placement in the tracks. The growls help with dynamics, but the vocal hooks rightly center around more floaty melodies to absorb. Each of the four tracks have some standout moments, and the dark yet inviting atmosphere made from the combination of riffs, keyboards, and leadwork does set the stage each time for genuine melancholy.

Considering Adrift in Remorse as Affasia’s first output makes the effort an even stronger one. There’s a songwriting maturity and flow to Adrift in Remorse that feels much more akin to a veteran act. Affasia provide a fresh twist on the death/doom norms and should find equal embrace from the gothic and shoegaze-y quadrant because of it. An excellent starting point with loads of potential.