Aeverium – Time (Out of Line Music) 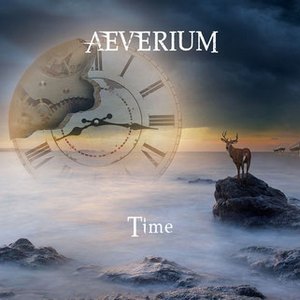 Always a treat to find an album that defies a quick and easy classification. There’s a lot of attributes that can be pinned to Aeverium’s second album, Time, but none really give enough of a solid description of the band on their own. And while this doesn’t mean that the band are in a radical new creation per say, it does indicate that they are striving to go their own way.

So what bits and pieces do make up the bulk of Aeverium? Well, there’s some modern metal and industrial influences in the riffing (we’ll go so far as to say the riffing structures do have an ever so slight nu-metal flavor in a few moments), some gothic overtones a la early Lacuna Coil, some symphonic aspects, along with some straight-up metal elements. Some moments of intensity on the guitar end and some screaming (see “Brave New World”) couple with electronic elements also find their way in. One of the album’s strongest dynamics is that of vocalists Marcel Roemer and Aeva Maurelle. There is a good sharing of the material, and one never outdoes the other – each has their time in the spotlight and contrast each other effectively, eschewing the normal “beauty and the beast” vocals for a wide range of emotions and styles. Of course, this is aided by a band behind them that continues to alter the landscape with each track that followed, while still keeping a sense of continuity to it. What’s more is that they’ve taken the time to produce acoustic versions of most of the songs for the deluxe edition, which bring in some new elements and feelings to the album versions (check out the two versions of “My Farewell” – the album has Maurelle’s vocals, the acoustic has Roemer’s).

Considering the more welcoming nature of modern metal to embrace outside influences, it seems a shame that a band like Aeverium is going unnoticed. They offer a lot of potential on Time, and don’t play things as cut and dried as their peers. Worth an look for sure.