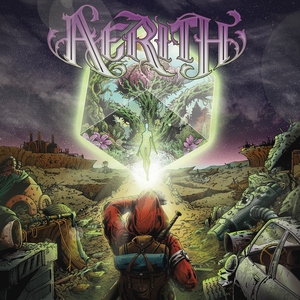 One of those ‘popping out from the middle of nowhere’ type of releases, Aerith does still come with a pedigree behind it. California’s Aerith consists of Aborted drummer Ken Bedene, alongside Frank Bedene and Aaron Green to round up the line-up – with a slew of guest musicians on each track to spice things up. In short, Aerith provide a solid tribute to Gothenburg-styled melodic death metal while keeping one foot looking forward.

Despite the shiny modern production and synth enhancements, there’s some solid old school melodic death metal trimmings to be found. Heroic guitar melodies are commonplace events in each track, providing some serious ear-candy and strong enough to induce a grin in even the most hardened melodic death metal naysayers. Frequently occurring at blazing tempos, it further recalls the more aggressive end of the genre (Detonation, Disarmonia Mundi) while engaging in some glorious guitarwork that embodied early In Flames and Dark Tranquillity (“Temptress” is nothing short of stunning). The afore-mentioned synth backing and production make it feel fresh, and give it a more epic scope – infectious and hooky while commanding a grandiose vibe that modern day atmospheric death metal bands strive for. The first two tracks (not counting the intro) feature some clean vocals from Melissa Rosenburg, whom some may recall from Mechina, and this really pushes the epic feelings up as well. But the remainder of the tracks more than hold their own with just screams – if anything, they dig further into the melodic guitar department. Each track also features a guest solo, with no shortage of big names: Benjamin Ellis, Mike Carrigan, Chris Themelco, John Abernathy, and Marios Iliopoulos lay down some scorchers, going far beyond simply being just a mere selling point.

A hybridization of both new and old, Aerith have concocted a near perfect formula for melodic death metal that oozes potential. Triumphant melodies, epic soundscapes, and immediate hooks come together in fresh and exciting ways – making Aerith a real winner. The start of something that could be huge.