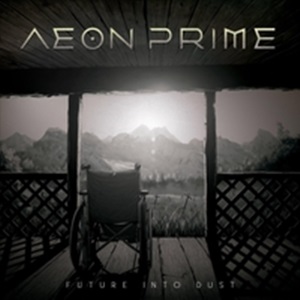 Starting in 2009, Brazilian quintet Aeon Prime aim to blend a classic metal foundation with originality and vibrancy for the current marketplace. Following up The Poet and the Wind EP release from 2010, Future into Dust as the band’s first full-length presents material with prominent attention to potent musical hooks and harmonies, as well as vocal melodies that prove their all-encompassing stylistic scope opens interesting songwriting possibilities.

Unafraid to incorporate Latin guitar flavoring tastefully when necessary, Aeon Prime inject spots of power or thrash riffing against conventional metal grooves and fiery lead break combinations. Comfortable in mid-tempo paces, Yuri Simões and Felipe Mozini dive into tradeoff/gallop moments which allows bassist André Fernandes to add his low-end prowess for the bubbly “Revolving Melody” that intertwines a feel of Iron Maiden and Uriah Heep against some classic rock background vocal harmonies. Vocally Michel de Lima strays a bit from a conventional belter – his range lies somewhere between an emotive rocker meets James Hetfield-ish sneer (leaning towards current Metallica versus the aggressive 80’s period). This approach can work on melodic material such as “Ghost” and “In Gold We Trust” – but his choice of syllable enunciation can be a tad challenging to stomach on wordier fare like the heavier “Newborn Star”. It’s hard to ignore the larger than life main foundational sequence for “The Commandments” – the guitars and drums locking into parts riveting ears like early Rainbow.

Aeon Prime appear to be on the right path in terms of establishing their own take on heavy metal – and should incorporate more of the flashes of progressive abilities and speedier transitions because “Deadly Sacrifice” provides ample musical fireworks to build upon for the next record. Seeking out a new drummer currently should aid the cause, as there are times where that department felt very linear and too stiff for the songwriting needs. Those consumers who want something different in the straightforward heavy metal platform should give Future into Dust a few whirls – their meat and potatoes approach with cultural/progressive flashes makes them an interesting band to keep tabs on.