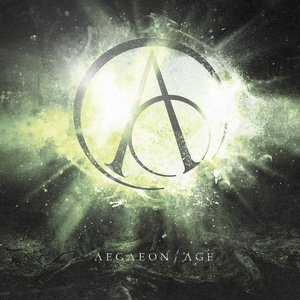 It’s been a while since there’s been new music from the Aegaeon camp. Sure there were two singles since 2012’s Being, but Age also reunites the band with their original (and rather brutal) vocalist Jim Martin. It’s all a fine set up for what could be some amazing fireworks, given the band’s foray into more atmospheric death metal that had been advancing since Dissolution. Unfortunately, it doesn’t quite deliver on all cylinders.

There is much to like about Age, but it ends up falling short of expectations. On the positive end, the band’s contrast of brutal and ethereal has continued to evolve. Aegaeon has truly reached the point where they feel like a soundtrack to a journey through space. The music features some heavy, deathcore grooves and dreamlike synth passages, occasionally merging the two together. Age is meant to be listened to from start to finish, and it’s effective in taking the listener on a voyage (apparently through the cosmos). Martin’s vocals are also just as subhuman as ever, yet retain a distinctive discernibility. You can understand what he is saying yet it’s impressively low and bellowing. The juxtaposition of his roars and the occasional respite from riffing makes for an interesting pairing. However, the one piece that falters is that there’s almost too much atmosphere. The moments of visceral intensity are frequently too spaced out from each other, which makes the album subject to a few lulls over the course of a listen. While some may enjoy the approach, it just seems that a few more ‘kick up the adrenaline’ spots would have pushed things to the next level.

On the one hand, it’s fantastic so see one of deathcore’s more inventive and interesting bands fully back in the game. On the other, it would be nice to cut into just slightly more aggression to give additional balance to the band. Perhaps next time.