Act of Destruction – Beyond Eternity (Self-Released) 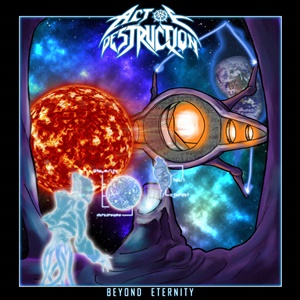 Chicago has consistently had a thriving heavy music scene – names like Trouble, Zoetrope, Znowhite on through to Novembers Doom and High Spirits making inroads in their respective genres. Act of Destruction also call this home, releasing their debut album Extinction in February 2015 while seeking to enhance and alter as many realities as possible with their music. Beyond Eternity is the quartet’s follow-up, a five-song EP showcasing a diverse palate of influences, aligning everything from melodic death metal to thrash and progressive aspects to ensure as distinctive and original of an approach as possible.

Getting right to the twin melodic guitar harmonies out of the gate for the folk-ish death-oriented opener “Eternal Combustion”, the rhythm section has this solid mid-tempo groove nature that propels the subsequent blasting/scream combinations. At other times the twin axe team of John Bravo and David Kraus lay down some addictive power/heavy metal riffs and build upon them with excellent melodic accents and second level creativity – where Nevermore or older In Flames moments spring to mind even against the extreme screams for “Ascending into Glory”, the lead break highly engaging as it keys in on the atmosphere of the arrangement without shredding to the heavens. The diversity track to track allows the listener to not feel ear (or brain) fatigue – the band employing multiple singers to handle the clean, growl, and fierce deliveries that make the EP dynamically appealing. When you can hear Warrel Dane-like piercing melodies going line for line with deep, discernible growls during “Spiritual Infinity”, it draws more interest as the double kick action and circular guitar themes penetrate the aural landscape. Weaving in narrative parts gives the material more of a theatrical nature, but most will be excited by the power meets melodic death trilling and spiderweb-like runs that galvanize metalheads, incorporating the best of Swedish/Finnish influences thrown through a North American nuance. The final song “Starkblast” is the longest at slightly over seven minutes, containing doom riffs at the start as well as a cultural musical undercurrent – showcasing a bit of their intricacies and pounding the listener with some thrash-triplet led rhythms and Gojira-ish vocal patterns.

Beyond Eternity will gain interest mostly from the melodic death metal consumers – but doesn’t dissuade those adventurous thrash and progressive-minded folks to come into the fold.