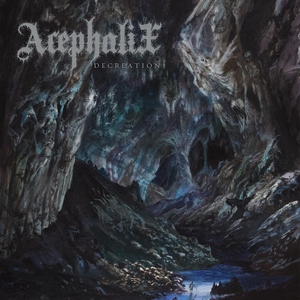 Acephalix have been making their way through the underground now for 10 years and two previous full-lengths. In addition, some of their members are involved with other deathly acts such as Vastum and Necrot. So they’ve established a bit of pedigree if you are looking for some dirty and grimy death metal with a bit of crust on the side.

Decreation sees the band moving a bit further beyond the crust influences and focusing more on the old school death metal delivery. Some of it still lingers once in a while, but consider this album as being more rooted in classic death metal. Some nods to Grave and Entombed are inherent, but it’s never at the level of obnoxiousness of some of their more copycat-ish compatriots. Instead, the band focuses on catchy and pounding musicianship – the kind of thing that’s not too far out there in terms of technicality. You can dig right into a stomping, mid-tempo rager like “Mnemonic Death,” with its massive grooves powering the way and enjoy it on the first listen. Unsurprisingly, it’s the mid-tempo that the band finds itself in more often than not, and make good use of it melodically. Like the aforementioned comparison acts, the high level of brutality is never affected too much by the melodies, but they give it enough character to make them stand out. The leadwork is particularly enjoyable, with tracks like “Egoic Skin” not being afraid of providing some shred to mix it up from the groove and lumbering riffs.

The only slight negative to Acephalix’s approach is that despite the emphasis on serious groove power and lurking melodies, it sticks to the confined and well-worn territories of death metal. However, it’s not a serious issue for the more devoted, as Decreation packs in plenty of thick hooks that old school aficionados are bound to enjoy.