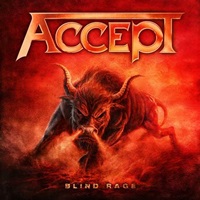 You only get one chance to make a reunion impression, and the stakes are high in the case of Accept. 2010’s Blood of the Nations certainly put the current multi-continent act back on the map (three-fifths of the group currently spend most of their off time in the USA), and two years later Stalingrad solidified their headline status in traditional heavy metal. What can the troops rally around this third time w/Mark Tornillo at the microphone helm?

The greatest anthems in their catalog have always thrived on melody of some sort: be it the classical touches in the guitar (“Metal Heart”), twin harmonies (“Fast as a Shark”), or those thunderous mid-tempo riffs coupled with gang chant choruses made to scream in unison at the top of your burning lungs (“Balls to the Wall”). So it’s not surprising after a few playbacks that these 12 songs work off of that template, honing in a little deeper on the right hook/riff combinations that please traditional and classic power metal followers all over the world.

The first single/video “Stampede” has a slight up-tempo punch in the verses, Mark screaming his head off while the Hoffmann/Frank duo circle around their Flying V wagons in a thick steamroller of power chord/ tasteful lead break expertise. As the album unfolds, you’ll hear those unique Accept nuances, be it the simple note enhancement that signals the chorus of “Dark Side of My Heart,” or the mighty, epic riff that along with the background ‘ahh… ahhh-ahhh-ahhhhhh’ vocals makes the 5:58 “Fall of the Empire” resonate for those who love classics like “Princess of the Dawn,” Wolf again tearing up the emotive lead part through classic bluesy textures that recall 60’s/70’s axe mentors Hendrix and Blackmore.

When there are commercial aspects, they come in the form of Peter’s classic bass pumping for “Wanna Be Free” or the semi “Restless and Wild” guitar/drum gallop for “200 Years,” but this is Accept 100% through and through. Another stellar production job from Andy Sneap, as he has given the band the necessary ripe tones to appeal to both the old guard and the younger generation. And there’s no sense in debating Udo versus Mark vocally at this point, just enjoy the fact that both are healthy, continually productive in their golden age, and we can benefit from two acts churning out European style traditional metal to the masses. Another smile creeps across my face as at 3:27 of closer “Blind Journey” you’ll hear Wolf infuse another classical melody tribute effortlessly a la “Metal Heart,” understanding the parallels between the two styles.

Overall, Blind Rage gives you an hour’s worth of fervent head banging material, and given their recent Wacken performance this year, these Teutonic Terror men show no signs of burning out!