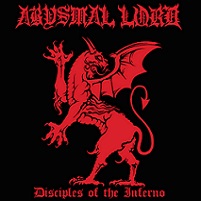 Evidently, the race is still on to determine who can be the most grim, or worse, backward. Extreme metal’s strongly primitive roots (looking at you, Hellhammer) made it possible for low-fidelity to become a scene standard. Thus, the turgid, sludge-smeared, reverb-soaked sound was born, causing a racket in the process. And since it’s mid-80s birth, many have tried to replicate the old “feeling” or “sound,” but to mixed results. Here to give it another shot is Louisiana’s Grave Ritual and their first proper full-length, Disciples of the Inferno.

As so suggested, Abysmal Lord play a hearty death/thrash mash-up, not terribly removed from the nascent rumblings of the aforementioned Hellhammer (it should be noted Abysmal Lord are much better musicians) and early Sepultura circa Morbid Visions. Lost in the whole thing is instrumental clarity, replaced by stunted guitars propelled by the constant churn of punk, or blasting drums. In turn, the reckless nature of cuts like “Temple of Perversion,” “Sabbat,” and “Black Liturgy” roll and tumble in a suitably raw manner, heightened by indecipherable vocals and bonsai guitar solos. Basically, just how they used to draw it up in the old days.

Even the fine folks at Hells Headbanger’s recognize Abysmal Lord aren’t “reinventing the wheel,” which is sort of a broad understatement, but given the context, perfectly understandable. But the album’s ten songs, down the row, all punish and grope from the depths (or the dead) like they’re supposed to, tossing out modern conventions in favor of that old-school flavor. Whether it’s appealing to the ‘ole ears is up for debate, yet if we’re looking for a time warp album to the land of early back patches, denim and leather, and devil-loving, then Disciples of the Inferno is the way to go.