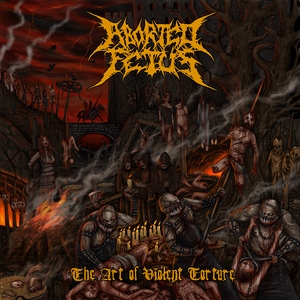 With a well-established sound from the get-go, derivative as it may be, no one is looking for Aborted Fetus (yes, Aborted and Dying Fetus paint you a good picture) to be the genre’s next benchmark for brutality. The name basically implies the experience that you are going to get. If you dig it, great – otherwise the band is pretty clear with both name and title of what you are going to get.

The fifth album from these Russians appeals to one real demographic – brutal, slamming death metal fans. Those who can’t get enough Dying Fetus will not be able to get enough of an album like this as it does hit all of the same marks. Low guttural croaks, catchy grooves and plenty of slamming riffs, and all-out brutality are the norm as you make your way through the album, with very little in the way of surprises. “Awaiting” and “The Last Way” are acoustic cuts, but it’s “Buried Alive” that outshines the rest of the album. “Buried Alive” takes some of those melodic tones and adds them to the band’s usual entourage of tones, making for a more dynamic venture that feels introspective, yet still entirely brutal in execution. If only some other tracks tried to switch things up like this one.

By the end, outside of the aforementioned tracks, The Art of Violent Torture is a fairly redundant affair. It’s predictable and safe, meaning that Fetus fans are going to still get some mileage out of it, but outside of that niche, it’s nothing you haven’t checked out before. It’s brutal and it’s heavy, but that’s really all that there is to describe it. More tracks with a creative approach like “Buried Alive” could move the band along much further.