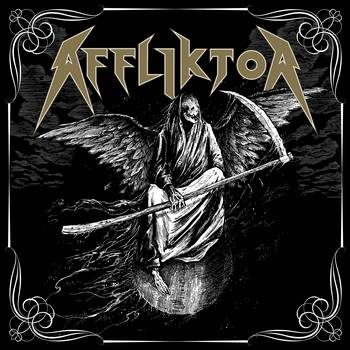 Always nice to start the weekend with some fresh music. Today we have teamed up with Transcending Obscurity Records to host a stream of Affliktor’s “Backwards into Hell,” from its upcoming self-titled release on October 20th (through Transcending Obscurity of course). As usual, if you dig what you hear below, feel free to click on the Bandcamp widget to hear a few more tracks and/or PRE-ORDER the album. There’s even a box set available, containing a certificate, guitar pick, sticker, and poster.

Affliktor is the newest band from Toby Knapp, who has been seen many a time here at DR through his work in acts like Waxen and Where Evil Follows. “Backwards into Hell” blends black metal with thrash, and unleashes quite a firestorm in the process. The riffing is intense, and rather headbang-friendly due to it’s aggressive and assertive force. But even with only about 3:30 in the track, there’s time for a rather shreddy solo – one that stands up to the high standards of Knapp’s previous efforts. Listeners can expect a high-energy blackened thrash effort with plenty of seething melodies.

Says the label:
Guitar legend Toby Knapp who has been involved in the creation of extreme metal music since the early 90s is here with his new band AFFLIKTOR. Playing scintillating black/thrash metal with wicked licks and seamless solos, Toby explores the genre and revitalizes it with his fresh outlook. It’s uncommon to see mind-bending guitar playing while staying true to the raw and underground aesthetic of the style. The majestic artworks made by Mark Riddick only portray the dark and ambitious nature of AFFLIKTOR. The vision behind the band is unheralded in all its experimental, convoluted glory. Black/thrash metal never sounded this exciting.