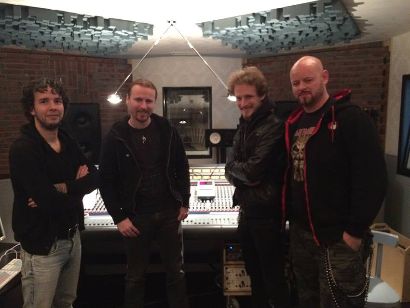 German symphonic metallers XANDRIA has checked in with the following update:

“Yes! Yes! Yes! It’s true. There were some rumors already, but we can now confirm: We just hit the studio! We are recording! We are recording the successor to Neverworld’s End and already can’t wait to share the result with you. Well, that’s still quite some way to go, but we will feed you with some bits and pieces over the next weeks and months. So – please keep following us on Facebook, keep checking our web site and let’s get started for the next chapter in XANDRIA. 2014 here we come!

In the picture you can see our co-producer Joost van den Broek together with three of us in the heart of the Sandlane Recording Studios in the Netherlands.”

The yet to be titled new album is going to be the sixth studio album in the band’s career. The production is a collaboration with Joost van den Broek (AFTER FOREVER, STAR ONE, REVAMP) and Sascha Paeth (EDGUY, EPICA, AVANTASIA), joining forces with band’s main composer Marco Heubaum, mutually responsible for the upcoming work.