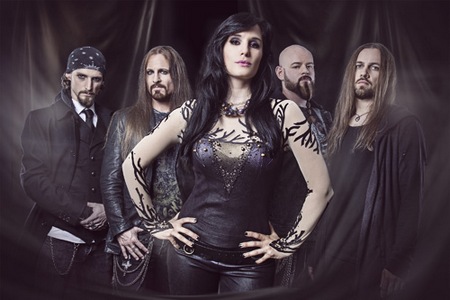 Hot on the heels of their fifth and (arguably) finest release to date in the form of Theater of Dimensions, Xandria has been already making the rounds with touring. Starting the year off with 70,000 Tons of Metal and a few dates in Germany followed. But across the Atlantic, excitement has been building for the band to hit North American shores. Following an unfortunate misfire last fall, Xandria are finally making their way across the US and Canada with a headline set. DR was on-hand at the first gig of the tour in NYC, and frontwoman Dianne van Giersbergen took a few minutes to speak with us about Xandria’s goings-on since January, as well as follow-up on a few lingering questions that we had from the last time around (most importantly, yes – she did get her fill of pancakes on 70K).

Dead Rhetoric: The album [Theater of Dimensions] is out now, how’s it been received so far?

Dianne van Giersbergen: Very well. I think, like us, reviewers have been very enthusiastic about the direction that we have moved in. It brings us back to the catchiness of Neverworld’s End. But the production is far better, the songwriting is far better. I’ve been much more involved, so vocal-wise everything is now into place, which we couldn’t do with Sacrificium. I think it’s our best one so far…I’m obliged to say so, but I do think it is.

Dead Rhetoric: Along those lines, does having a stable line-up helps? It’s been relatively stable since you joined the band.

van Giersbergen: For me, it’s stable because I’m the last one that joined [laughs]. I think it is – we are just like brothers and sisters; we do not always get along, but that happens even in the best of families.

Dead Rhetoric: In terms of Theater of Dimensions, could you talk a little more specifically about “Forsaken Love” and “We Are Murderers (We All)?”

van Giersbergen: For both songs, the lyrics were written by Marco [Heubaum]. “Forsaken Love” – the name says it all; it’s a sad song of course. What I personally like about the song is the celtic vibe that it has. It gives it more of a folklore vibe and feels more authentic. Maybe even a bit more fragile. Another thing I really like is that it is very low for my voice. It’s something we haven’t used too much, other than the Meat Loaf cover [“I Would Do Anything for Love” on Fire & Ashes]. I like it – there’s a little bit of Whitney Houston style in there at the low end.

“We Are Murderers” is a topic that Marco really wanted to do. I’m more of the ‘live together” kind of person instead of the heavy shout-outs of “we are doing this wrong” – I’m the other direction. And it came out just before Christmas [laughs]! But it’s a very good live song.

Dead Rhetoric: This is the band’s first headlining tour in the US – what are your expectations going in?

van Giersbergen: I don’t know, because I’m afraid to jinx it. I’m just looking forward to seeing everyone. I’m more of a ‘let’s see in the moment’ kind of person.

Dead Rhetoric: So when you pooled together a set list, was it difficult knowing that it was for a headlining show in North America for the first time?

van Giersbergen: No – the newer songs resemble us the best. So there are a lot of new songs on the setlist. There are favorites from Neverworld’s End – “Valentine” and some favorites from Sacrificium. And not to forget – we have the Fire & Ashes EP, which brought forth…well, I like every song on there. Some people kind of diminish an EP as not being very important, but I think it is. So we have “Voyage of the Fallen” on there. I don’t think “Unembraced” made it. But there’s also the remake of “Ravenheart” of course.

Dead Rhetoric: You mentioned the Fire & Ashes EP and the Meat Loaf cover, which was a bit of an unorthodox choice. I’ve read that you were influenced by Meat Loaf – is that why the song was picked?

van Giersbergen: It is, but the boys are also Meat Loaf/Jim Steinman fans. We were all on the same page with the cover. I chose the specific song – it was a great opportunity to switch the roles around. To have me do the lead part and then have a good friend of mine, Valerio Recenti, do the smaller part at the end. His band is called My Propane; I have to mention that because it’s a good band and you have to check them out. I think he does an awesome job on it. It’s interesting that you asked me because today I was showing that song to the Kobra and the Lotus guys and they really liked it.

Dead Rhetoric: Going back to songs like “Forsaken Love,” why do you feel that symphonic metal bands choose to place more melodic/ballad-type songs in with the heavier tracks?

van Giersbergen: I think to give the listener different flavors. If it’s all heavy, then you get bored after a while. It’s important to have some high tempo, mid-tempo, and some ballads. Ballads really make my voice shine. It gives [my voice] a showcase. I think that’s what an album needs. If I may be very honest, my favorite ballad is the other one [“Dark Night of the Soul”]. “Forsaken Love,” even though the lyrics are ballad-y, the chorus isn’t really a ballad. It’s something [energetic and] we can still use on a festival set. “Dark Night of the Soul” is like, 100% ballad.

Dead Rhetoric: The last time we spoke, the idea of “more is more” in symphonic metal came up and I wanted to go a little further with that. How do you know where the line is? There’s all this big, bombastic stuff…when do you say, “oh, no. That’s too far.” Or is there a line?

van Giersbergen: I think we have to give a lot of credit to our producer and co-writer of the album, Joost van den Broek. He is a genius in balancing these things out. He also did Epica’s latest record [The Holographic Principle]. He just ‘gets it.’ He’s been a big part of the writing process, and he taught us that from an early stage on, it’s important to keep things in mind. Although you start writing the basics – you need to think ahead. It’s like chess. Like how riffs follow up on one-another, where instruments and arrangements can go. Which moods are needed – you’ve got choirs, heavy riffs, orchestra, double-bass…which parts need this or that, and when is it beneficial to have an open, atmospheric part, for instance. He’s really the master of this.

Dead Rhetoric: I read somewhere that he does film scores too. Do you think that helps with providing that push towards what works and what doesn’t?

van Giersbergen: I’m sure of it. I’m not sure if it’s really film scores – he does score movies but not like the 90-minute ones. He also does…for example, I’m from the Netherlands. The Royal House…when the King was crowned, he also wrote pieces for his ceremony. So big national parts, he does that too. It makes him well-rounded. He has such a vast knowledge of how to compose, and working with someone like him is mind-blowing. Its like, “yes, we CAN do that.” It’s such a perfect way to lift our ceiling. We are all focused on our own instruments. So there’s a certain level that you can reach, but then you need to reach out [to climb higher]. Sometimes a talent is also surrounding yourself with the right people.

Dead Rhetoric: The last few albums, Xandria has “found themselves” so to speak. What do you feel defines the band nowadays?

van Giersbergen: It’s hard to say. Live, I would say we have a lot of energy. I think what defines us is that you can see us having fun on stage. It all starts there. You have to have fun with what you do. Music-wise, I don’t know – it’s hard to say because I’m in it. I’m part of the songwriting, so I’ve seen the little babies grow. It’s hard to put into words what is best – if it was a real child, could you do it? When you’ve seen a child grow, could you then say “this is what defines this person?” I can’t…maybe I can list a few talents but the music isn’t all about talents.

Dead Rhetoric: Yeah, I see what you are saying there. By defining it, you are putting a limitation or boundary on it.

van Giersbergen: That’s true, yeah. So let’s just leave it up to the listener [laughs].

Dead Rhetoric: In terms of symphonic metal, as we were saying, there’s a big and grandiose sound to it. How much does escapism weigh in as being a part of that sound?

van Giersbergen: I think it’s a big part. Maybe not even in a fantasy way, because obviously that’s there. But I think for a lot of people it’s a way to escape from whatever is going on. It could be world problems or just small things. Something as basic as getting home from a bad day at work and putting on some metal and blowing off steam. Minor to major problems – I think music, in general, is a nice way to get rid of tension and get your head sorted out.

Of course, fantasy stories do come to mind. The last song on the album [the title track], which is a very long song. That’s a fantasy story. It depends on who writes the lyrics. Marco is really into fantasy and I like to write about things that I’ve been through or different vibes. For example, the first song, “Where the Heart is Home,” is about touring. It’s about the not-so-nice end of it, like leaving your loved ones at home. Sometimes it’s really hard – when you leave someone who is sick for example. You can’t take care of someone, or be with someone, or be with family in general, to support them in hard times because you are away. Those are the things I like to write about because it helps me on stage to sing a song if the subject is real.

Dead Rhetoric: So you are here in the US now and the tour will run for a few weeks. What is Xandria up to next?

van Giersbergen: Festival season in Europe. Then after that, I don’t know. We have requests for Asia, Russia, Latin America, and more North America. Let’s see where we go.

Dead Rhetoric: Are you trying to make North America more of a priority since it’s so hard to break into the marketplace here?

van Giersbergen: We are, that’s certainly the idea…but like I said, I’m an ‘in the moment’ type of person so let’s see what happens from here.