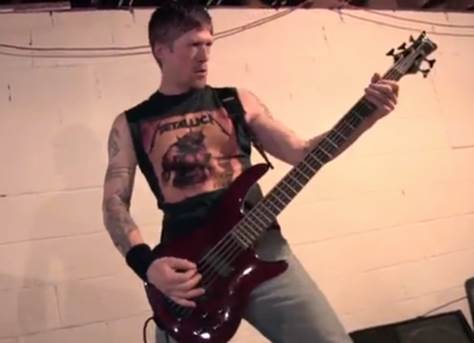 Last night, bassist Jared MacEachern made his live debut with San Francisco Bay Area metallers MACHINE HEAD in Spokane, Washington. Brief fan-filmed footage of the performance can be watched below.

MACHINE HEAD announced yesterday that MacEachern had made the cut and, earlier this year, were in the process of searching for a temporary bassist replacement for this summer’s Rockstar Energy Mayhem Drink Festival in the US earlier this year.  MACHINE HEAD conducted an extensive search for candidates, sifting through over 400 videos and evaluated everyone’s performances, including MacEachern, who made the short list without a second thought. After reviewing all of the submissions, the band narrowed down the 400-plus candidates to a short list of seven, each of whom took a trip to Oakland to perform a handful of songs in person and spend the day hanging with the band.

Flynn remembers: “We had locked in Brandon Sigmund of local boys HOSTILITY to play bass on that tour, but we soon realized we’d need someone to hit the high harmonies. Our A&R guy [at Roadrunner Records], Monte Conner, recommended Jared since he was already on the tour, and that ended up being a great call. Jared flew out a few days before the tour and rehearsed with us and did great. What was most impressive about the whole thing was that he was doing double duty — opening for MACHINE HEAD with his band at the time, SANCTITY, and then later singing with us. He would stay sober until after our set, and often get in the van and drive all night. His seriousness and dedication was awesome to see and it stuck with us.”

Jared enthused: “I’m ready to get to work! This tour is going to kick ass and the new tunes are heavy as shit! I’m SO looking forward to making good music with good dudes!”