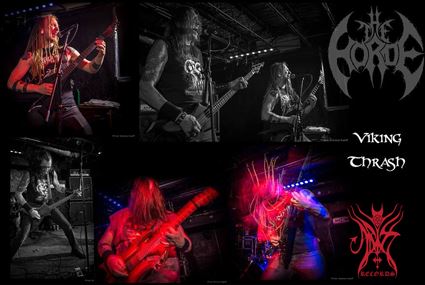 Viking thrashers THE HORDE has entered The Dungeon Of Doom studio with producer Drew Webster to record its second full-length album, Destroyer… Slayer of Men, for a 2014 release via Abyss Records. Songtitles set to appear on the CD include “Usurper Berzerker”, “Conquering Of The Firewyrm” and “Behold In Despair”. The effort will also contain “a special track at the end for fans of our first CD,” according to guitarist Tim.

A rough mix of the track “Pray Hater” from “Destroyer… Slayer of Men” can be heard below.

THE HORDE’s latest album, Thy Blackened Reign, was released in 2011 on StormSpell Records.

Formed in 2006, THE HORDE hails from Rock Island, Illinois. The band has shared the stage with the likes of EXODUS, 3 INCHES OF BLOOD, JOB FOR A COWBOY, THE BLACK DAHLIA MURDER, SOILENT GREEN, SKELETONWITCH and THE RED CHORD.