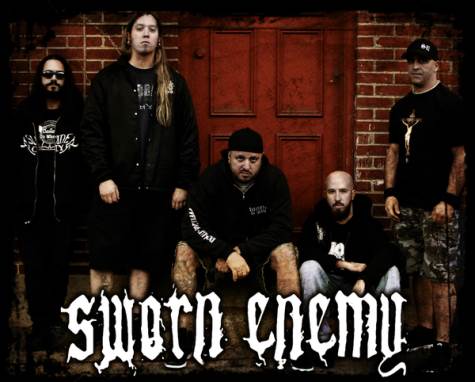 Explains vocalist Sal LoCoco: “Many of you may know SWORN ENEMY has been on the scene for a long time. We have been creating some killer new music and we are ready to get it to the fans who want it. However, we are in need of fan support.

“This campaign will not only get you some very cool limited time only merchandise and deals, but most of all it will help us fund the making of our new album.

“This band has always thrived on the help of the underground and our passionate fans. This time around it will count more than ever, as it will help to get the new music out to the masses!!!! With your contributions, no matter how big or small, we will be able to record, mix, master, and release a hard and brutal album.

“This is as real as it gets people… Let’s make it happen.”

SWORN ENEMY plans on releasing its new album this fall as well as touring in support of the CD. They are scheduled to play the 2013 East Coast Tsunami Festival on September 29. Prior to the event, they will head out on an East Coast headlining tour of the U.S. and Canada. Tour dates will be announced soon.