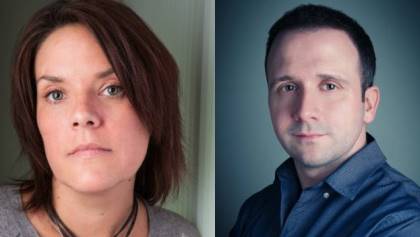 Maria Ouellette comes to Spinefarm as the Senior Director of International. Prior to her new position, Ouellette owned and operated her own consulting and marketing firm for four years, representing the interests of hard rock and metal artists, managers, labels and other partners. Ouellette has worked in the metal industry outside of the U.S. for over a decade, giving her unrivalled international experience in the hard rock world and making her ideally qualified for this new role. Ouellette will now direct the global marketing and promotion of Spinefarm’s U.S. and U.K. centers, as well as coordinating the international activities of artists signed to the company’s office in Finland.

Joining the label as Director of A&R is Darren Dalessio, who has held a variety of A&R and management roles with rock and metal bands, most recently at 5B Artist Management, home to powerhouse acts such as SLIPKNOT and STONE SOUR, where he spent four years working with artists including TRIVIUM and AMON AMARTH. Dalessio will now help Nachsin develop and build Spinefarm’s roster with the best and brightest new metal and hard rock artists from all around the world alongside the label’s other key international A&R executives Dante Bonutto in the U.K. and Euge Valovirta in Finland.

Both Ouellette and Dalessio report to Nachsin and the appointments are effective immediately.

Spinefarm is part of Universal Music’s new Caroline network, the premier global partner for independent labels and artists. Spinefarm artists now benefit from a truly global reach and expertise while enjoying a boutique environment in which they can grow and flourish.

“After years helping to grow the careers of some of the most talented and groundbreaking artists in rock and metal, I am truly excited to be leading a label that is expanding and looking to enter into significant new partnerships,” Nachsin said. “With Darren and Maria on board, and more to come, Spinefarm is the destination for artists looking for a truly global home in hard rock and metal.”