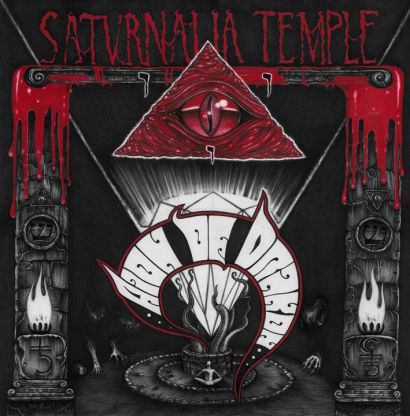 Swedish doom outfit SATURNALIA TEMPLE have signed a worldwide deal with France’s Listenable Records. SATURNALIA TEMPLE was born from ages of dark magical strife, to explode in Draconian outbursts of doom infested trance. Like no other group in the present occult musical revival, SATURNALIA TEMPLE actually matches the outspoken rituals with long-term magical dedication as well as a unique chalice of extreme metal through heavy blues and psychedelia.

Their first record UR (2007) has now achieved a strong influence in the scene, and the second album Aion Of Drakon (2011) led to roaring press in major metal magazines. DARKTHRONE’s Fenriz picked up the group for his mix tape podcast in celebration of his 40th birthday with Vice magazine. 2012 saw them conduct a very successful ritual at the crucial Roadburn Festival in Holland, as well as doing a European tour and opening for doom legends PENTAGRAM and JEX THOTH. 2013 sees the band doing the Stella Natura festival in California and a tour across the States after that. In Europe they will do festivals including Geggan (Sweden), Hell Over Hammaburg (Germany) and Satans Convention (Germany).

Presently the group consists of founder/songwriter Tommie (guitar, vocals, drums) and bassist Peter and new drummer Jens. A new album is planned for release in Europe on Listenable in early 2014.