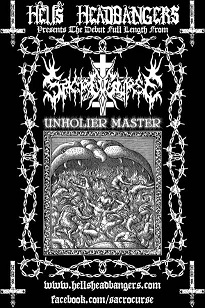 Hells Headbangers has announced the signing of SACROCURSE, whose membership is split between Mexico and Turkey. The band released their debut demo this summer, Sulphur Blessing, by Iron Bonehead Productions.

But now, SACROCURSE, are currently preparing their Hells Headbangers debut album, Unholier Master, tentatively set for May 2014 release on both CD and LP formats. Much like the Sulphur Blessing tape, SACROCURSE,’s Unholier Master will be guided by the evil hand of scene veteran Zolrak Montes, most known for NODENS and UNHOLIER, but also a former member of MORBOSIDAD and OBEISANCE.

Together with help from Turkey’s GODSLAYING HELLBLAST, Zolrak promises to release yet more unhinged barbarity firmly with the ancient tradition of South American black/death, but again adding a uniquely memorable element to the caustic chaos at hand. More SACROCURSE, news to be announced shortly.