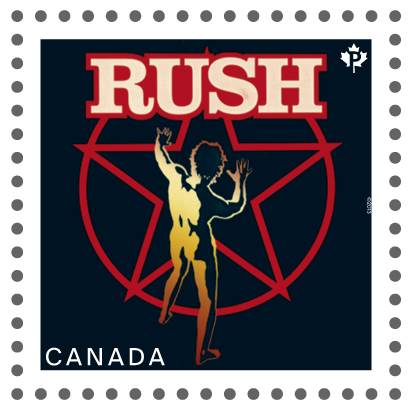 With the JUNO Awards around the corner (more or less next week), Canada Post has given Canadians a sneak peek of the Canadian Recording Artist Stamp Series to be released on July 19. This time around is exceptionally worth rejoicing over as Canadian bands, RUSH, TRAGICALLY HIP and THE GUESS WHO are being featuring for the first time and will be spotlighted in this fourth issue of a series created to honour musical legends.

Jim Phillips, Director of Stamp Services for Canada Post shared: “This year’s series features Canadian bands that have shaped the music industry in Canada. Each band has achieved national acclaim, along with international radio airtime and extensive tours.”

RUSH is among the 2013 inductees to the Rock And Roll Hall Of Fame. The induction ceremony will be held tonight at L.A.’s Nokia Theater. A shortened version of the evening’s events will air on HBO on May 18.