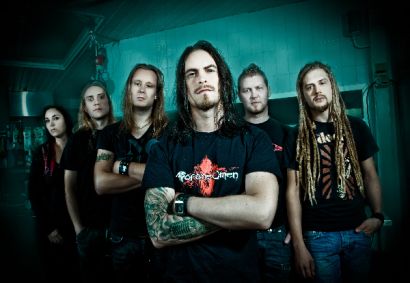 Finnish melodic death act MYGRAIN have posted the video for the song “Dreamscape,” which comes off their forthcoming fourth album, Planetary Breathing, which will be released September 27th via Spinefarm Records. The video can be viewed below.

1. Incantation
2. Waking Up The Damned
3. Ambivalentine
4. Black Light Supernova
5. Dreamscape
6. Rats in The Cradle
7. The Ghost in Me
8. Mechanimal Instinct
9. The Final Skyline
10. Planetary Breathing

About Planetary Breathing, the band previously stated: “It was recorded during August and September at Sound Supreme studio with Janne Saksa, who was teaming up with us already on our first two albums. The mixing and mastering was again handled by our hero Dan Swanö.

The debut album Orbit Dance was released in 2006. The second album Signs of Existence came out two years later and the third one MYGRAIN in 2011. The last-mentioned felt like a launch to something new and it was like a new beginning for the band. Planetary Breathing can be characterized through familiar MYGRAIN elements: the catchy choruses, melodies and keyboard lines are still there, whereas the winding and striking guitar riffs being a solid base of the MYGRAIN sound.

We are so excited of the result we achieved with this album! Together with Janne and Dan, we managed to capture the most rich and balanced MYGRAIN sound so far. Those of you who have witnessed us live must know that we love touring – performing for you guys. To us, that is the very essence of all of this. Thus, we are really looking forward to the gigs that are following the release of the new album. The tour dates will be announced later this spring.”