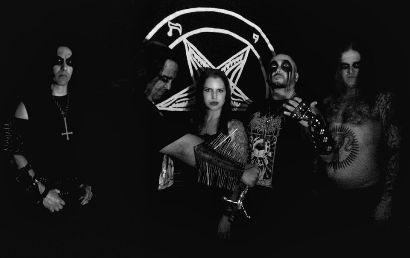 Moribund Records has announced the signing of Texas black metal cult MORBUS 666. MORBUS 666 was formed in 2009 in the Houston, Texas underground from members of Adumus and fellow Moribund labelmates Bahimiron. In the first year, they recorded their debut MLP, Mortuus Cultus, out of songs that were originally written for Adumus. Adumus was about to take an indefinite break due to Cerebus (vocals) enlisting into the armed forces, so the remaining members of the band (Vomit, Moon, and Archfiend) set out to find a temporary replacement and finish the songs that they had written. They invited Grimlord from Bahimiron to help them with the vocals, and with this union came the early blueprint for the band.

After a few rehearsals, they all decided that a different band name was in order, as the new songs did not quite fit what was previously laid down with their band Adumus. Grimlord came up with the name Morbus 666. The name was created to represent infernal sickness and disease, a different way to reference demonic possession. The first material still had a strong Adumus influence within, and the band agreed moving forward that a new direction would slowly filter its way into the newer batch of material. The first song of their new identity came in the form of “Through Black Fog Burns The Eyes Of The Devil”, which appears on their split with Teratism entitled Spilling The Blood Of The Righteous. The gatefold 7″ vinyl was released on Worthless Endeavors in early 2012.

Then MORBUS 666 went into a dead-but-dreaming state, lurking away from sight and all the while gestating into a new form. Finally, this year, they decided to unearth the beast and get serious with the band, as it had always been a side-note of sorts while the members focused on their priorities with Imprecation and Bahimiron. MORBUS 666 revamped their lineup, with Moon and Grimlord continuing with the band and adding members Priest (Thornspawn), Poe (Unchrist), and Jenoside (Bahimiron). Now they are ready to unleash new material, to be released on Moribund Records later this year.