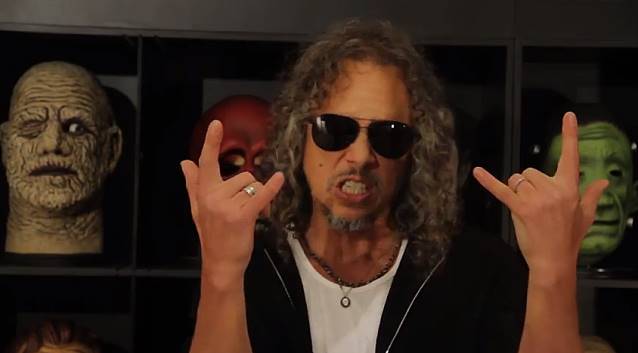 METALLICA guitarist Kirk Hammett will host his first horror convention titled, “Kirk Von Hammett’s Fear FestEviL” this February 6-8, 2014 at The Regency Ballroom in San Francisco, California. The three-day horror fest will include musical performances from Nuclear Blast artists EXODUS, CARCASS, DEATH ANGEL and ORCHID. Not only will Hammett host the convention, the reknowned metal guitarist will join DEATH ANGEL and EXODUS on stage for their encores.

Hammett was a member of EXODUS’ original lineup before replacing Dave Mustaine in METALLICA in 1983 and came up with the EXODUS name. The METALLICA guitarist also had his hand in producing DEATH ANGEL’s 1986 demo, Kill As One.

In 2012, Hammett released “Too Much Horror Business – The Kirk Hammett Collection”, a vast 228-page hardback book documenting his love of all things related to the horror genre and features more than 300 photos of items from the collection of horror memorabilia he has accumulated over the years. The book also included three lengthy interviews with Hammett, who also wrote the captions for many of the photos.