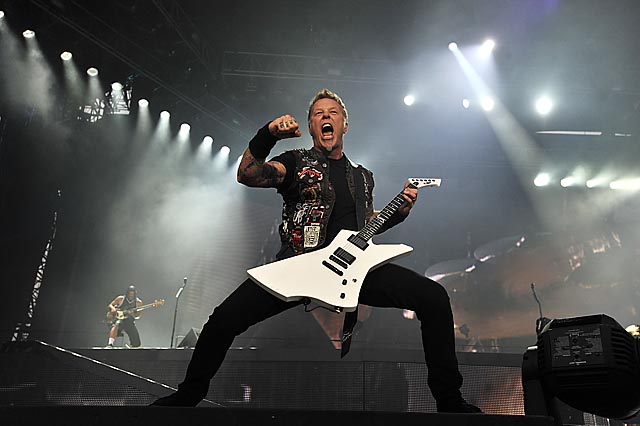 Adam Graham of The Detroit News is reporting METALLICA will not reload at Belle Isle in 2014. The veteran metal act will not reprise their two-day Orion Music + More Festival in Detroit next year, a spokeswoman for promoter C3 Presents has confirmed.

The festival will be taking a year off, as Metallica is touring Europe in early June, the time period the festival was held the last two years. The fest may return in 2015, C3’s spokeswoman said, although it is unclear whether it will return to Detroit.

This year’s fest was held June 8th and 9th on Belle Isle and attracted an estimated 20,000 fans a day. RED HOT CHILI PEPPERS headlined the first night and Metallica closed out the fest the second, after playing a secret set under the alias DEHAAN on the first day. DEFTONES, DILLINGER ESCAPE PLAN, RISE AGAINST, DROPKICK MURPHYS and more also played the festival.

The festival came to Detroit this year after debuting in Atlantic City in 2012. Promoters struck a three-year deal with the city of Detroit to return in 2014 and 2015, although C3 had the option to back out at any time. C3 paid the city $100,000 for the use of Belle Isle this year and was set to pay $100,000 in 2014 and $250,000 in 2015. As part of the agreement, half the money was to go back to Belle Isle and the other half would go Detroit’s other parks. The city would also get a percentage of the festival’s concession sales.

After two years in two cities, Metallica’s members said they were hoping to find a permanent home for Orion. “We would like to not be the fugitive festival that has to set up camp every year in a new environment,” Metallica drummer Lars Ulrich told The Detroit News prior to this year’s fest. “So ultimately, the goal is to find a spot and park ourselves there and see if it’s possible to become part of the A-list group of festivals.”

Metallica’s 2014 tour plans include a European run in June and July. Dates in Germany, the Netherlands, Belgium and England have already been announced, with more dates to come, according to a band spokesman.