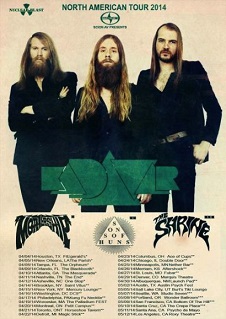 Berlin psychedelic hard rock trio KADAVAR has announced a North American headlining tour, set to kick off on April 4th in Houston, TX. The scheduled five week trek will see the band take the stage in 25 major markets across the US and Canada, bringing its much talked about live show and deep daze retro-metal to as many music fans as possible.

“We are excited to return to North America and our amplifiers are at the ready,” commentsvocalist / guitarist Christoph Lindemann. “We hope you are ready for what we are bringing your way. See you soon.”