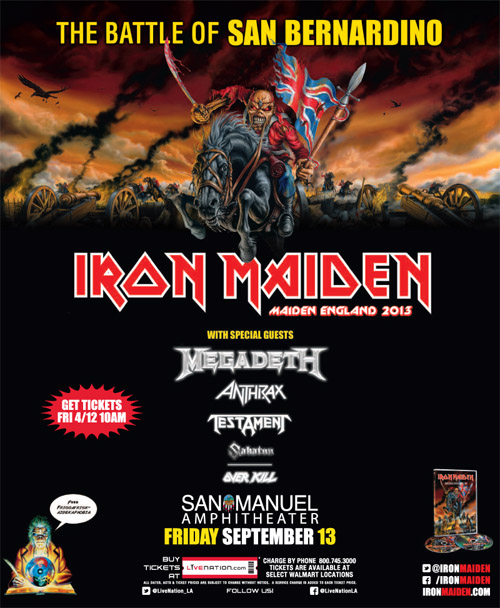 IRON MAIDEN will make a brief return to the USA this September, playing seven specially selected shows en-route to Latin America where they will once again headline at the legendary Rock In Rio Festival, Brazil, on 22 September, their show there having recently sold out to 70,000 fans in just a couple of hours

These will begin with a first-ever visit to Raleigh, NC, for the opening show on September 3rd at the Time Warner Cable Music Pavilion followed by taking Metal back to country music capital Nashville, TN where Maiden haven’t played in over twenty years, at the Bridgestone Arena on September 5th. There will also be shows in Kansas City, MO, Sprint Center on September 7th, St Louis, MO, Verizon Wireless on September 8th and the Mandalay Bay Events Center in Las Vegas, NV on September 12th , all of which Maiden last visited way back in 2000 on the Brave New World Tour. Plus a return to Austin, TX for a show at the 360 Amphitheater on September 10th,  the first time the band have played in that city since the original Seventh Son Of A Seventh Son Tour twenty-five years ago!

Very special guests on all these dates will be MEGADETH.