California heavy rockers HIGH ON FIRE will release their new album, Luminiferous, on June 23 via eOne Music. Recorded at Salem, Massachusetts’ GodCity Studios with producer Kurt Ballou, the CD is the follow-up to the group’s 2012 release, De Vermis Mysteriis, an album hailed as “not for the faint of heart ” by The New Yorker and “a fantastically constructed bloodbath” by Entertainment Weekly. 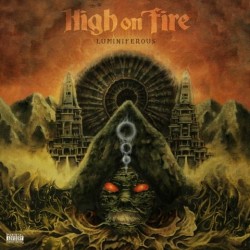