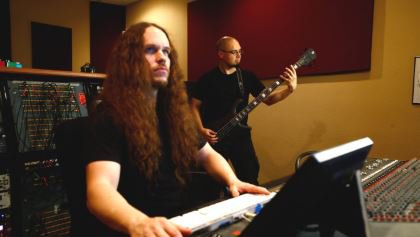 Floridian extreme death metallers HATE ETERNAL have announced the addition of drummer Chason Westmoreland to the group’s ranks. The native of Las Vegas, Nevada has already laid down drum tracks for the band’s forthcoming album, the title and release date of which have yet to be revealed.

Westmoreland will also join the band on the upcoming tour, which is scheduled to begin in the spring. 25-year-old Chason Westmoreland has been playing drums since the tender age of five and has tour with such renowned acts as FALLUJAH, BURNING THE MASSES, ENFOLD DARKNESS and OCEANO.

HATE ETERNAL founder and principal member Erik Rutan (guitar, vocals) comments on Westmoreland joining the band: “Chason is such an amazing talent and a very determined guy. He came down to try out in June and literally blew us away! We bonded instantly musically and personally, and JJ and I knew he was the right guy and drummer for HATE ETERNAL. Chason has a high motor, hits hard, plays fast and is a very diverse and dynamic player.

“The drums on this album have a very primal and visceral feel to them and I think he did a tremendous job on the recording. I cannot wait for us to get on tour and deliver the goods!”

Westmoreland states on joining HATE ETERNAL and his contribution to the new album: “I am extremely honored to join HATE ETERNAL.

“The new material is very challenging and has a lot going on. I put everything I had into this album and I’m very excited about the results. I cannot wait to see what the future holds and get on the road with our new album!”

Rutan and bassist/vocalist J.J. Hrubovcak are holed up in the bandleader’s Mana Recording Studio (CANNIBAL CORPSE, MOUNTAIN GOATS, GOATWHORE) putting the finishing touches on the new HATE ETERNAL album, which is due in early 2015 via Season Of Mist.