Says the band: “He took his own inspiration and painted a scene of total destruction as described across the album. We thoroughly enjoyed our collaboration with him. We strictly did not want the uninspired digital photoshop album art that is so prevalent these days. This is hand painted visions of a man inspired by music.” 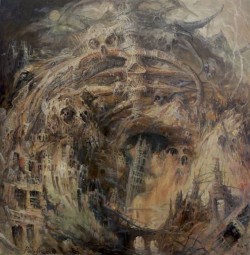