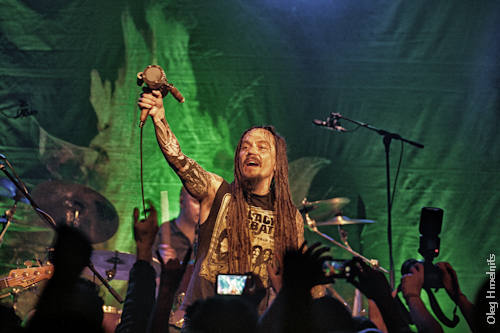 Finnish metal giants AMORPHIS have unleashed the video for “The Wanderer”, which was directed by Patric Ullaeus of Revolver Film Company, who has previously worked with DIMMU BORGIR, LACUNA COIL, IN FLAMES, SONIC SYNDICATE and KAMELOT, among others. The new clip can be viewed below via Youtube.

Says the band: “We’ve had super fun shooting this new video with Patric Ullaeus who did an amazing job, as always! For us, it’s one of our favorite music videos from all the ones we’ve done so far!”

“The Wanderer” comes off AMORPHIS’ eleventh album, Circle which was released on April 19 through Nuclear Blast Records. Production and mixing duties for the follow-up to 2011′s The Beginning Of Times were handled by HYPOCRISY mastermind Peter Tägtgren, who has previously worked with such bands as CHILDREN OF BODOM, CELTIC FROST, IMMORTAL and DIMMU BORGIR. The recordings took place at Petrax Studio (NIGHTWISH, CHILDREN OF BODOM, KORPIKLAANI) in Hollola and 5K Studios in Helsinki. The cover artwork was created by Tom Bates (BLEED FROM WITHIN, DEVIL SOLD HIS SOUL) and can be seen below.