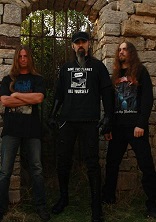 At first, planned as a 7″ EP with two new tracks, they will extend it to another mini-CD / mini-LP since they now have composed a total of four tracks. The band are still working on arrangements and lyrics as well as vocals, yet they hope to have the songs fully completed by the end of the year and to record them during the first part of 2014.

In other news, the limited 10″ mini-LP version of their latest release, Shattered Ante Mortem Illusions, will be out this autumn through Gospel Of Death Records (France) and which includes guest appearance of Eric Daniels (ex-ASPHYX, GRAND SUPREME BLOODCOURT) as well as collaboration work with Rogga Johansson (PAGANIZER, ex-EDGE OF SANITY).