Female-fronted heavy metallers, A SOUND OF THUNDER, will release The Lesser Key Of Solomon on September 9th through Mad Neptune Records. The heavy riff-laden songs are complex yet instantly catchy, featuring razor-sharp musicianship and the lung-busting performances of powerhouse classically-trained vocalist Nina Osegueda.

“If your erection lasts longer than four hours, you probably listened to our new album. Also, you’re welcome”, jokes Osegueda. “On a serious note, this album is our best work to date. The songwriting and performances from the band are on another level. The album was a joy to make and that comes through in the final recording.”

Hot off the 2013 release of Time’s Arrow, their best-selling and best reviewed release to date, A SOUND OF THUNDER was brimming with confidence and eager to get back into the recording studio. With too many musical ideas for just one album, the band selected only its darkest and most atmospheric material for The Lesser Key of Solomon. The result is an ominous collection of songs united by supernatural themes. The album represents the fulfillment of a promise to A SOUND OF THUNDER’s fans, known as the “Legion of Thunder”, who funded the album via the Kickstarter crowd-funding platform in the autumn of 2013, raising over $23,000.

The Lesser Key Of Solomon running time of 61 minutes, features 10 of A Sound Of Thunder’s most intense yet nuanced songs, exploring territory which is simultaneously heavier and more atmospheric than ever before. The steel-armored wail of prodigal vocalist Nina Osegueda (called by some “the lovechild of Rob Halford and Bruce Dickinson”) tops off deft performances by a band that knows how to deliver the goods. From the demonic fire of “Udoroth”, to the crushing Dio-esque “Master Of Pain”, to the sweeping scope and dark theatricality of “Elijah”, A SOUND OF THUNDER delivers a timeless album full of metal classics.

The Lesser Key Of Solomon will be available as a digital download, compact disc, and limited deluxe vinyl-book. 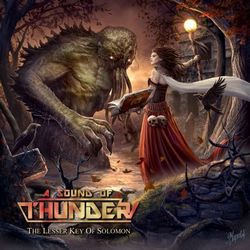