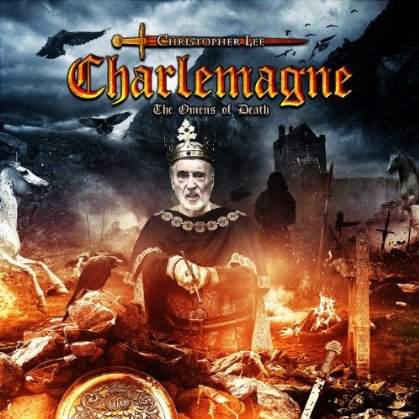 Actor Christopher Lee, who has appeared in such films as Star Wars, Lord of the Rings, and Dracula, will release his second heavy metal album, Charlemagne: The Omens Of Death, on May 27 on audio CD, a two-disc gatefold vinyl and MP3 downloads.

The singer-actor’s first solo affair into the metal genre was the critically acclaimed album Charlemagne: By The Sword And The Cross (2010), which was more symphonic than its successor.

Sir Christopher says: “The first ‘Charlemagne’ album is metal, of course, but what I sang was more symphonic. Now on the second one, ‘The Omens Of Death’, it is one hundred percent heavy metal. I’ve done my bits and pieces, and they are heavy metal. I’m not screaming or anything like that, but it is definitely heavy metal.”

The music in Charlemagne: The Omens of Death was arranged by Richie Faulkner. He completed the work shortly before he was called to join JUDAS PRIEST as lead guitarist.

Richie said: “Most of the songs were already there, but they needed riffs, drum parts and musical parts that reflected what the guys wanted — which was a metal record with an aim to be played live by a band. Some of the tracks didn’t have any music at all and were just Sir Christopher singing his melodies. I remember how surreal it was sitting in my place at the time with Saruman blasting out over the speakers! I’ve no idea what the neighbours thought!”

Guitar idol champion Hedras Ramos Jr., is given the guitar duties in the album. Something of a daunting task, but he managed to pull it off.

Hedras said: “It was a lot of fun for me. I just had to listen a lot to IRON MAIDEN, JUDAS PRIEST and all those guys — the old-school heavy metal, to absorb the sound and the flavour of this music. Composing the music for ‘The Devil’s Advocate’ and ‘The Ultimate Sacrifice’ was quite a trip and tons of fun, because I was given total freedom to add my personal guitar approach to the album. This is a great album for all metal, fantasy and Christopher Lee fans!”