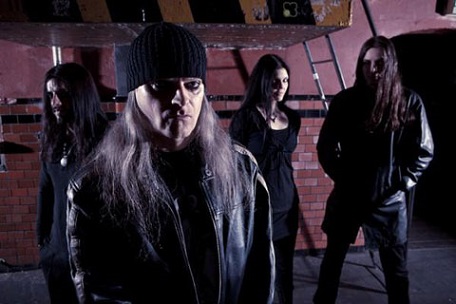 The very public demise of Celtic Frost was a massive blow to the underground…let’s not pull any punches. After all, without CF, there wouldn’t be the adventurous plot of metal as we have it now – it might all still be standard thrash and death metal. The band’s reformation in the early 00’s led to the overwhelming Monotheist in 2006, an album that re-established the band as a modern force, leading to a spate of touring across globe. Things seemed (key word: seemed) to be clicking, but behind the scenes, the band (Tom G. Warrior, Martin Eric Ain, Franco Sesca) was unravelling. In-fighting, backstabbing, jealously, lack of motivation all lead to the band’s break-up in early 2008. With the sordid details spared, a shell-shocked and saddened Warrior regrouped with Triptykon, an outfit he promised would replicate Celtic Frost in the closet manner possible.

Indeed Triptykon picks up where Celtic Frost left off. Sprawling, dark, and experimental, the Swiss/German quartet’s debut Esparista Daimones is a mountainous effort, the type of album that takes significant time to consume. Warrior’s down-tuned, primal sub-riffage is as prevalent as ever, now nicely complemented by emerging guitarist/producer V. Santura of Dark Fortress fame. It is this union with Santura that while not as significant as the Warrior/Ain tandem, is what makes Triptykon go. Best of all (according to Warrior) relations in the band are at a positive, functioning level.

We caught up with a very-candid Warrior, who was phoning fresh after a run of Japanese and European dates. As expected, the man proved to be not at all a loss for words…

Blistering.com: This one, even alongside Monotheist has to be good to get out of your system, right?

Blistering.com: Even though you intended for this band to be a continuation of Celtic Frost, does this feel different than a typical Celtic Frost release?

Warrior: Definitely. Musically and artistically it feels like a Celtic Frost album. Personally, it feels much better and it’s terrible to have to say that. There was a time when it felt fantastic to be in Celtic Frost, but when I sit here and think about it, a part of Celtic Frost gave me joy and pride. Unfortunately, the last few years of Celtic Frost were the opposite of that. Now, the experience of being in a band again with friends and is the essence of the term “band,” it’s an immense joy to go to rehearsal to create music together. There’s an immense chemistry between the band members. I feel extremely happy travelling and creating music with this band and I hadn’t felt that way in Celtic Frost for quite a long time.

Blistering.com: Are you still struggling with distancing yourself from Celtic Frost?

Warrior: How couldn’t I? I was the main songwriter and I basically formed the band with Martin. From 1984 and even when the band didn’t exist, Celtic Frost was the center of my life. You cannot flick the switch and that’s the past. I’ve been able to put the initial turmoil behind with my work with Triptykon. On the other hand, a part of me will never be able to get over Celtic Frost. It’s more about the way we lost Celtic Frost. If it would have been a decision by all of us if the band had run its course, it would have been much easier to bail. The way it fell apart, it’s a very bitter ending.

Blistering.com: The liner notes for the album strike a chord, just reading about what you went through and your thoughts around each song. Were those difficult to pen?

Warrior: It was none more difficult than writing the actual lyrics. I had to release those thoughts; I had to be honest with myself on this album. I didn’t want to alienate fans by putting so much hatred on an album, but I’m a musician and my music and lyrics are my emotions. I didn’t want to write an album with all of these fictional words when all of these emotions are raging inside of me. I was well-aware of that these liner notes wouldn’t immediately find support; people might be appalled by them. I decided to be an exhibitionist – it is my life and I force no one to read my lyrics or listen to my music. Having said all of that, it was very difficult to shape these feelings into words.

I want to be a part of the band, the gestation, its growing, so of course you have to be aware of what you created in order to create. I don’t want to be artificially ignorant of what has been on the last album. It had to be a part of my thinking and my emotions.

Blistering.com: A big contributor to the album is V Santura. What’s the working relationship with him like?

Warrior: In all fairness, the chemistry with each of the four members is equally important. V Santura is the most visible member next to me. The band was formed as a band and from the very first day I made it clear that the songwriting was open to everyone. Every decision we have made has been taken as a band. It’s not a Tom G. Warrior dictatorship. I get my opinion, but I’m one of four people and this album could not have been shaped without each of them.

V Santura is an extremely accomplished musician and engineer and producer. It was fantastic and an extremely constructive experience to create this album. He was the first of the members to take my offer to contribute to the songwriting. He brought these songs to the rehearsal room and many more that will resurface at some point – he’s a fantastic songwriting. That’s the reason why we had him in Celtic Frost – his playing style matched us perfectly.

Blistering.com: What initially stuck out about him that made you want to work with him in Celtic Frost?

Warrior: That’s an easy thing to answer: it was his personality. Victor played the last 60 shows in Celtic Frost with us and that was probably the most difficult time in the band. The fact that he had no ego, was always professional and maintained a friendship with me considering all of the ego and penis problems the other members were a part of the daily life of Celtic Frost, I knew he was the guy I wanted to approach. There were a number of guitar players that contacted me when they knew I was forming the band, but I knew I was going to ask V. Santura first. I knew if I had him in the band, I will never run into such ego problems that crippled Celtic Frost.

Blistering.com: Switching gears, let’s talk about some of the books you’ve written. When did you catch the writing bug?

Warrior: I never discovered a knack for it, I just knew I wanted to write books. I didn’t think I had the talent to do so. I’m a book fanatic. Part of my youth and the escape from it along with music, was reading. I became a book fanatic. I’m a book collector and my home resembles a library. It was clear that one day I was going to try writing, so I wrote the books that I knew I would read as well. I’m just writing the way I’m talking and if people like it great. I went to high school like everybody and after that, I got apprentice as a mechanic. That’s basically it. I don’t have formal guitar lessons, I never took singing lessons or writing lessons. I’ve been left to my own resources, but it’s not up to me to rate myself.