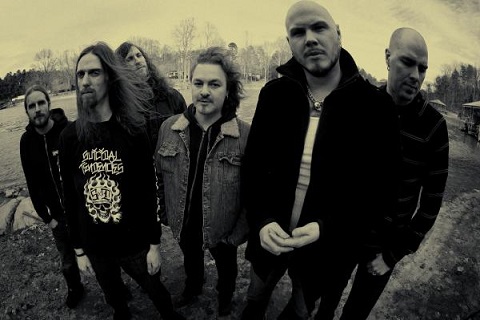 Nice what a few years off will do to one’s creativity, huh? After 2005’s very drab and nu metal-inspired Stabbing the Drama, Peter Wichers, Soilwork’s founding member/guitarist/primary songwriter bolted the Swedes to get away from the rigors of touring. Such a move came as a surprise to many, considering Wichers’ standing in the band, leaving vocalist Bjorn “Speed” Strid to pick up the pieces and move on. The result was 2007’s underrated Sworn to the Great Divide, an album that seemingly righted the Soilwork ship, in spite of glowing complaints as to how “un-Soilwork-like” it sounded. Guess these people didn’t pick up on how generic Stabbing the Drama was…

As the story goes, a refreshed Wichers returned to the fold in late 2008 for a spate of touring, segueing into the creation of the band’s newest and best album in eight years, The Panic Broadcast. An apt description would be thatTPB is an intensified, almost brash take on the band’s mandatory A Predator’s Portrait and Natural Born Chaos efforts, with Wichers pulling out all the stops. Indeed there is a spark back in the man’s songwriting, as evidenced by excellent numbers like “The Kill,” “Deliverance Is Mine,” and “King of the Threshold” where technical, melodic, and over-the-top drumming (Dirk Verbeuren turns in a career performance) combine for one of the year’s most welcome return to forms.

We caught up with Strid to discuss The Panic Broadcast, what it’s like to have his partner-in-crime back, and to wax on some of the band’s more unheralded songs. As usual, the affable 6’4, bald frontman (virtually a Swedish version of yours truly) was ready and willing…

Blistering.com: Peter’s back and the album is probably your heaviest in years. If we go back to Sworn to the Great Divide, where does The Panic Broadcast succeed where that one failed?

Bjorn “Speed” Strid: We like to create music that everyone can understand and with Dirk, he was held back in the songs. What we wanted to do with this album is for every member to go apeshit and do exactly what they wanted to do. And it really feels we have the same vision. It turned into this beautiful and aggressive album.

Blistering.com: And that’s something evident right off the bat with “Late For the Kill, Early to the Slaughter.”

Strid: Yeah, that’s a very pissed-off song. When I listen to it, it sounds really pissed off and even the softer parts of the album have more presence too.

Blistering.com: Even a song like “Let This River Flow,” where it’s all clean vocals, it appears there were no parameters on the songwriting, correct?

Strid: Just do what you want to do. The only mindset we had, the key, was to capture the vibe we had on A Predator’s Portrait and Natural Born Chaos. We didn’t want to make another NBC Part II, but we wanted to capture that vibe and take it to a new level. We wanted it to be really progressive, but still come to the point and playful. I think that everyone in the band had the same mindset in putting this album together.

Blistering.com: Would you say things are back to normal? You’ve done a handful of tours with Peter and from all appearances, everything looks fine.

Strid: That’s what it feels like. He definitely needed those three years off. He was just running into a wall with the inspiration and found other things in life. He wanted to settle down, became a father a year ago, so he feels more secure. It’s very inspiring to see him like that and ready to do it again.

Blistering.com: Sylvain [Coudret, guitars] is the newest member but has been overshadowed by Peter’s return. What does he bring to the table?

Strid: A lot of interesting things [laughs]. He’s got to be from a different planet [laughs]. When you listen to some of the stuff, we’re like “How the hell did he come up with that?” He’s very technical; his playing is absolutely insane. And he writes songs a little bit differently than Peter. Peter is coming to the point where it has more speed, while Sylvain’s material tends to be more trippy. It’s been a great challenge for me as a vocalist to put vocals to his stuff. It turned to create some really interesting songs like for example, “Epitome.” That’s one of my favorite songs on the album. The melody is right, but it’s wrong, if you know what I mean [laughs].

Blistering.com: Right now, “The Thrill” and “Deliverance Is Mine” are the two standouts to these ears. What’s working for you at the moment?

Strid: [pauses] Lots of “Let This River Flow,” and “The Kill.” I love “Enter Dog of Pavlov.” It has a really beautiful intro.

Blistering.com: Listening to the album for the first time, were you taken aback as to how in-your-face the production is?

Strid: Absolutely. Peter did a great job producing the album; very organic, but still very hard-hitting. Jens Borgen who also did Opeth and Katatonia mixed the album. It’s very detailed, but like you said, still in-your-face. It’s dirty and clean at the same time. I’m really happy with the results for sure.