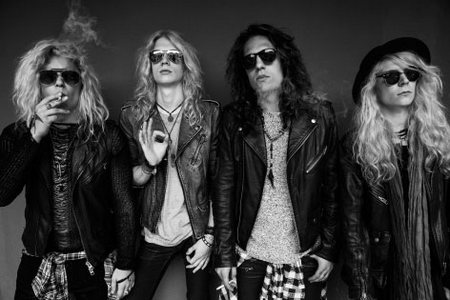 Over time, heavy metal has become a “no fun zone.” Most bands are all too serious about their music and image. Of course, there are exceptions to the rule now and again, but they never seem to generate the same level of respect as the uber-serious ones (take the more upbeat side of the folk metal movement, for instance). Perhaps what heavy metal needs is a bit more attitude and a bit more fun. One such band that is certainly up for having some fun is Finland’s Santa Cruz. Embracing the big arena, larger-than-life persona of the glam metal movement and tying in more modern day guitar fireworks, the band is set to start making a name for themselves due to their work ethic, as well as their sense of attitude.

Currently finishing up a tour with up-and-comers Amaranthe, Santa Cruz is making their first attempt at conquering the United States. A young band that goes out to give a charismatic performance night after night is always a plus in DR’s book, so we took the opportunity to chat with vocalist/guitarist Archie Kuosmanen and guitarist/backing vocalist Johnny Parkkonen before their gig at the Worcester Palladium. Read on to see how the band embraces the partying lifestyle of the glam genre and it’s lasting appeal, using social media effectively, and even how they pranked Amaranthe on the last date of their European tour.

Dead Rhetoric: Your band name obviously has influence from the Sunset Strip scene of the 80’s. How does it feel to be touring this large country at this point in your career?

Archie Kuosmanen: Yeah, it’s a dream come true, for sure. This is the place we always wanted to go. It’s really cool.

Johnny Parkkonen: We’ve got three shows down already, and the shows have been killer.

Dead Rhetoric: And this is your first official tour in the States correct? I saw that you have done NYC before.

Kuosmanen: Yeah, and LA. We did a stint where we did Los Angeles and New York City.

Dead Rhetoric: What do you feel is appealing about the glam sound?

Kuosmanen: It’s the genre of rock and roll that has the most balls, even though people dress up like chicks.

Parkkonen: It’s not this miserable stuff, with people complaining about shit. It’s about having fun.

Kuosmanen: There’s rock stars, and bands are larger than life, and the sound is too. People want that. Most of the bands now days are “common people” so to speak. If you take a band like Mumford & Sons, who are called rock. To me that’s not rock, it’s the boy from next door playing banjo.

Parkkonen: [Glam] is the most entertaining style of rock and roll there is.

Kuosmanen: To me, rock was always about looking God-like on stage. When I saw Aerosmith play when I was a kid, I was like, “these dudes are Gods!” It was always about the stage show, and the charisma. The whole package.

Dead Rhetoric: With your sound, what do you do on stage to promote that same kind of aesthetic?

Kuosmanen: Put on a show. Run around, do flips and stuff [laughs]. Just putting on a real good show, whip our hair, or whatever makes people want to watch.

Parkkonen: I think energy is the key.

Kuosmanen: Exactly. You have to put on a show that people can relate to.

Dead Rhetoric: Is it your desire to put on an arena performance, even in the smaller venues?

Kuosmanen: It’s pretty much always been our goal. Even if we are in a small pub, we are imagining we are in a stadium or something.

Dead Rhetoric: You are playing a sound that has been around for a while. So what do you feel that you bring that’s unique to the table that you wouldn’t have heard with say, Motley Crue?

Kuosmanen: I think that the latest album [Santa Cruz] has something new to offer. Things that Motley Crue could not have done back in the day. There are new elements to that sound. We are trying to carry the torch and take it to the next place.

Parkkonen: There are influences from the bands that weren’t around when Motley was. They could not have had those influences.

Kuosmanen: There are new technologies, which I’m not a big fan of, but we can still take advantage of it and try new things.

Parkkonen: We try to be open-minded and take influences from all around us. Not just from one genre of music.

Kuosmanen: We’ve got some pop roots in our songs, taken from Katy Perry or something [laughs].

Dead Rhetoric: It seems like there is a second generation wave that happened in Scandinavia, between Reckless Love, Crash Diet, and Hardcore Superstar – where you incorporated a lot of the older ‘80s style as well as keeping in mind the heavier elements. Do you think that’s where the difference is as far as what the newer bands are trying to do? Putting in a wider scope of influences?

Kuosmanen: To me, Hardcore Superstar, and especially Crash Diet, they were never like Motley Crue. It’s something different and much darker and more sleazy to me. Reckless Love is more ‘all about the ‘80s.’ They are good pals of ours and they do the whole sunshine thing.

Parkkonen: Crash Diet isn’t a band that sounds like you are having a good time all the time.

Kuosmanen: It sounds almost more like Alice in Chains. They are more ‘hardcore drug addicts and singing about the dark side of life.’ That was never the deal with bands like Guns and Roses.

Parkkonen: When it comes to the heaviness, I think it might also be because every other guy is playing in metal bands in Scandinavia.

Parkkonen: Everybody wanted to be Children of Bodom.

Kuosmanen: There’s a joke going around that people say that in Finland, kids start playing and learn the instrument and forget to look in the mirror and they go on stage and [there’s no presence]. In the US, it goes the other way around and they just look in the mirror.

Parkkonen: So we are trying to take both sides.

Dead Rhetoric: That is true. I think a lot of the American bands care more about the image and less about the musicality, where the European bands focus on the musicality first.

Parkkonen: It’s the combination of those two things that counts.

Kuosmanen: If you take a band like Van Halen, they had the musicality but they still had the other parts. They had the larger than life image and rock and roll decadence going on. So that’s what we are trying to do. We’ll see what happens though.

Dead Rhetoric: I recently saw the article on VH1 about the glam revival that featured Santa Cruz. How did it feel to be at the beginning of your career and cited as the inspiration for the article to begin with?

Kuosmanen: Yeah, VH1 is a huge channel. I always watched it so it felt really good. There were some great bands in the article, and we were probably the smallest ones.

Parkkonen: But not for long though!

Dead Rhetoric: So where do you see yourselves in say, 5 years?

Kuosmanen: In a tour bus like this, but with a couple more bras on the ceiling [laughs].

Parkkonen: Not on a couch, but being in a jacuzzi or something.

Kuosmanen: And not opening, but being the headliner and going to a bigger venue.

Dead Rhetoric: Embracing the glam metal sound, do you embrace the hard partying lifestyle on the road as well?

Parkkonen: Well there’s nothing else to do here! Are we just going to sit here for 10 hours in a row and go to the next show?

Kuosmanen: That’s why we do it.

Kuosmanen: You can make life on the road dull, or you can make it fun as hell!

Parkkonen: So why not make the most out of it? But still keeping in mind that you have to work tomorrow. One of the benefits of this job is the partying, because it comes naturally. You don’t even need to put up a party, because someone brings it to you.

Kuosmanen: You put in a lot of hard work to get to where you are, and you have to celebrate that. You have to remind yourself that every day. When you picked up your guitar in your basement and tried to learn that riff from “Paranoid,” and 10 years later you are playing in the States. You have a reason to party every day. 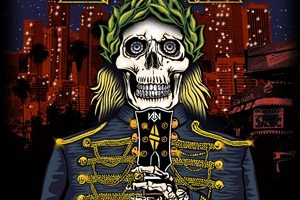 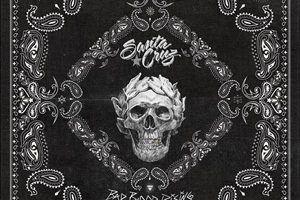 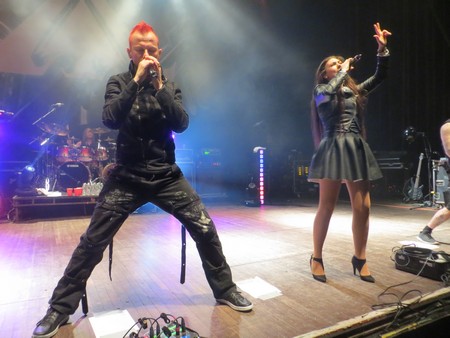