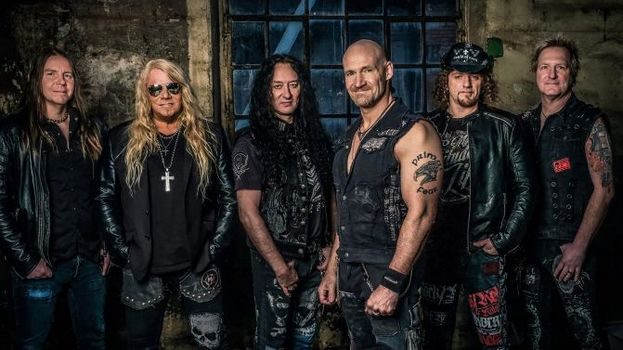 ‘I need to shut down Sting…he is singing for me!’ This opens the conversation before our Skype interview with bassist Mat Sinner of Primal Fear. It proves the man’s wide-open tastes in music – which shouldn’t be surprising given the man’s long musical career himself. Like clockwork every two years or so, veteran German act Primal Fear release another studio record for traditional/power metal fans to treasure. Apocalypse is the latest collection of songs that feature a steady variety of mid-tempo to slightly faster riffs, in the pocket rhythm section support, and the fierce, potent vocal melodies that reach for the sky or cause spontaneous sing-a-long, head banging action.

Remembering the revival of more melodic bands that started in those late 90’s with the self-titled Primal Fear record, it’s awesome to see the band stronger than ever on the record/tour front two decades later. Let’s catch up with Mat about business within the Primal Fear camp, a little talk regarding Sinner and his Rock Meets Classic duties, and varied discussion about numerous other music industry/business related activities beyond his thoughts on success, failure, and soccer/football talk.

Dead Rhetoric: Apocalypse is the 12th Primal Fear studio album. How did the songwriting and recording sessions go for this effort – was it pretty much business as usual for the group, or were there any challenges/surprises that came up?

Mat Sinner: It’s never business as usual if you are a musician like in Primal Fear. We first and foremost make albums for ourselves, and then for our fans. The thing is, after that intense touring during the last six years the band became closer and more united than it ever was before. I think we know what our fans want to hear. Rulebreaker the album from 2016 was our most successful album in our long career. Times have changed, but it was a really successful album and highly appreciated by the media, and by our fans. There was not any need or pressure to change anything drastically. We have a certain standard and a certain formula when it comes to writing songs and getting a schedule together to get an album produced. We just followed our instincts to make another great album which is a little different but still the Primal Fear our fans want to hear.

Dead Rhetoric: Was “King of Madness” an obvious first single/video choice from the album? Do you consider the video medium as important during the internet/social media age as it may have been during the 1980’s video channel heydays?

Sinner: Well, I have to correct you a little. The first single was “Hounds of Justice”, but “King of Madness” was the first real video clip. “Hounds of Justice” had just a lyric video. The second single was “King of Madness”. If you are a band on the standard of Primal Fear, touring the whole world and you have a lot of fans in a lot of countries making a video clip is nice to present the band in their current status and support the song. It’s just cool, I have no problems with that- we don’t live at the end of the 1980’s anymore when you had so much impact on metal television shows where your video could be played. Just to present the band, find new fans, and show your current fans what is going on – it’s an important tool. I still think that we can do this.

Dead Rhetoric: The lone epic “Eye of the Storm” has more of a Led Zeppelin meets Dio-era Black Sabbath atmosphere to it, which differs from previous Primal Fear epics. What can you tell us about the development of this song?

Sinner: It was just that we are collecting ideas. We came up with that idea, I had the idea that at least one song on every album, sometimes two, to be a little bit more epic, more parts, atmosphere and different tempos with different grooves. We chose “Eye of the Storm” not to have a 3 ½ minute arrangement, we put a load of effort into this one. We worked on the orchestral parts, different guitar parts. I think there are at least 10-12 different guitar sounds on this track, so it was a big challenge for us. In the end, everybody is very happy that we put this hard work into the song to make it special.

Dead Rhetoric: You mentioned in another recent interview that the lyrical content for this record is not about love songs – but more in line with the craziness going on around the world. Does this make it easier to match up with heavy metal compared to ‘happier’ times so to speak?

Sinner: No. I would love to be exactly the opposite. I would like to see great partnerships in the world, partners that we can trust. And not the rude language, no terrorism- just people that should think about living on a nice planet and that we can lead a good life, have fun and enjoy it. It’s just a little warning for what’s going on outside there. For me it’s not nice to be writing about idiots- it’s nicer to write love songs, but the time is not right for that.

Dead Rhetoric: Do you find this a scary world that we live in compared to the 1980’s with nuclear weapons and the Cold War?

Sinner: In my view, the red line is getting thinner and thinner. If some of these crazy guys out there push the wrong button, we will all go down. It was never that close as it currently is at this moment.

Dead Rhetoric: How much of a challenge does songwriting become when you are 12 studio albums into the band’s career? Do you find yourselves even more critical during the early creative stages of songwriting to make sure the quality is high without necessarily repeating yourselves too much?

Sinner: There is some truth in your words. I think in the beginning stages, we just wrote what we wanted and we didn’t think about if we could do it or not do it. Now it’s more like we are delivering a quality standard that we have to match. We write so many songs during a non-recording time, we can choose out of a lot of ideas. In the end we had around 25 great song ideas for this album, scaled down to 20 – then skipped down to 14 songs that we went into pre-production to start working on the details. The good thing is with Primal Fear we really enjoy our band and our partnership, it’s a very creative unit with a lot of ideas. And there will be a lot more Primal Fear material coming out as a result in the next few years.

Dead Rhetoric: Do you enjoy the process of working on your material within home studios versus the older days where you were on the clock in bigger studios?

Sinner: That’s half true, because a lot of our recordings are done in a big studio. We record the drums in a very big studio which is expensive, but I think the drums are the foundation of the album. We spend a lot of time in creating a good drum sound in a good drum room. Then we record the guitars, the bass – and where we take time is in Ralf’s vocals. We discuss the vocals, and Ralf records his vocals in his studio. And that is different than the old days, where you only had a few days to record vocals for the whole album. He has more time now where if he’s having a good day, he can sing 2-3 songs, but if he has a shitty day, he can skip it and say he won’t record that day. This is a luxury which is great, but also a key why the vocals are still in that top-quality space- it’s very important.

Dead Rhetoric: What do you enjoy most about working with Jacob Hansen when it comes to the mixing/mastering?

Sinner: He became a good friend, we’ve gotten to know him very well over the last few years, and he is the right person to mix our album. He understands what we want to hear and he works very hard on this. He’s a super professional guy, he helps us to create the last 10% of the sound that we need for the record.

Dead Rhetoric: Where do you see the major differences between your time on Nuclear Blast in the early years for Primal Fear versus your current run with Frontiers?

Sinner: For us, it is not a big difference. The earlier days, the first two albums we didn’t think about becoming a famous band. We did it for the love of music, we didn’t think too much about what would happen with the albums. As the first album came out, everybody was curious and we could tour the whole world for the first time in our lives – it was something very strange happening with us. Over the years it’s only changed a little bit. With the Seven Seals record, and New Religion album, the last album for Nuclear Blast and the first album for Frontiers, we tried to change and become a more sophisticated band. We tried out orchestral parts to branch out from pure heavy metal to a more symphonic style sound to our music. We wanted to experiment a little because we didn’t want to do the same album over and over again. Then came the point, we thought about our beginning and started writing more songs closer to where we started from. Twenty years is a long time and a long process, and at the moment we are in a great position. We can still write and present and perform the music that we love, it’s coming from the heart and we don’t have to pretend anything. The pure band we are we sound the same in the studio as we do in a rehearsal room, and that’s the fine thing. If Tom (Naumann) , the original guitarist who is still in the band, comes up with a riff like “Chainbreaker” it still sounds like it’s 1998.

Dead Rhetoric: What do you consider some of the key strengths to Primal Fear’s success?

Sinner: That we are working and very focused on our job. It’s fun when we can have the fun, and it’s serious when we need to be serious. We learned throughout the years, after six years of intense touring with over 150 shows every year, that when we go on stage we will forget everything and be responsible for our fans. The current status of the band is the strongest ever- if we go on the stage, you will see Primal Fear and we will give it 100 % for our fans.

Dead Rhetoric: Is it a struggle at this point to decide a definitive setlist, especially in a headlining situation with over twelve studio albums to pick from?

Sinner: Yes, this is tough. As we have the 20th anniversary, we will focus on different albums. We will play some songs from the new album, we will play the classics the fans want to hear, we can’t leave them out like some bands do – but there will be some songs chosen for the next tour which are rare and haven’t been played for a very long time, or we have never played at all.