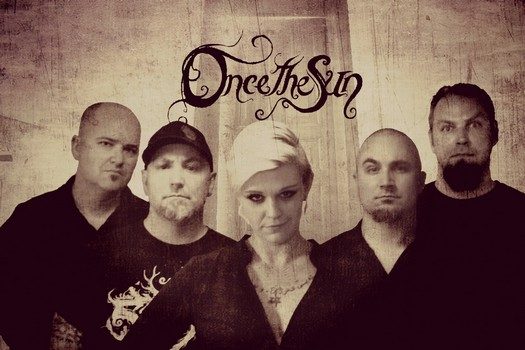 At the risk of being redundant, there’s a certain rush that comes with finding bands out of the blue on Bandcamp. Particularly when they are as striking in nature as that of Wisconsin’s OncetheSun. Blending elements of gothic, metal, and rock in a way that feels genuine and unique. The band has been slowly working their craft for over the last decade, with their latest offering, The Ghost Inside Me, being released this past summer.

The Ghost Inside Me has all the tell-tale signs of an impressive band in the making. They’ve slowly built up their own sound – of course there’s some influences to be found but they are designed into something distinctly more. They work in big hooks when they need to, apply the necessary darkness without going too far overboard, and vocalist Anna Bohn’s vocals have the strength and diversity to carry the emotive weight of the material. Learn more about the band’s sound, struggles of being independent, and what they do outside of the band.

Dead Rhetoric: How’d you come up with the name OncetheSun?

OncetheSun: We’ll never tell (hahahaha). We actually have never told anyone the real story behind our name… All we can say is that it involved a winter night, a deer, and 4000 brown M&Ms… But that’s a story that is best served over a cold beer.

Dead Rhetoric: Who are some of OncetheSun’s biggest influences?

OncetheSun: We all come from some pretty diverse musical backrounds. So our influences are pretty broad. We all have our own “thing” but everyone trades new music with each other… Sam (Drums) has been obsessed with Atmospheric Black Metal… Josh (Bass) is into Melodic Death, Jay (Guitars) is into Punk and guys like Tommy Emmanuel, Nick (Guitars) is a Gothic and Industrial type of guy. Anna (Vocals/ Keys) is into everything from Hardcore to Hip Hop, and everything else we just mentioned. We all just add our own spice to the OncetheSun musical soup and let each song just be what it may be.

Dead Rhetoric: You’ve had a few releases prior to The Ghost inside Me. How would you describe the evolution of the band?

OncetheSun: We definitely keep getting heavier with each release…. Which is not the norm. Usually you see bands lighten up over time… but it’s been a natural progression for us. Also we have been really paying to attention to layering and adding atmosphere to the songs… You know, some ear candy for people to discover when they really pay attention to the song.

Dead Rhetoric: How would you describe OncetheSun’s sound for those who do not know the band?

OncetheSun: Dark and beautiful…brooding and heavy. We want people to know that in a world of hurt and feeling lost that there is a light at the end of the tunnel. Sometimes the heavy is in the vibe of the song, distorted guitars, synths, double bass etc… but other times the heavy is in the emotional punch of the lyrics. If we had to compare it to current bands, we’d say throw some new In Flames and Cold in a blender with Lacuna Coil. That’s the closest we can explain it… It’s a weird mix… It’s a little bit of Metal, Alternative Hard rock, and a little Goth. We are really proud to say we don’t sound like anyone, OncetheSun is its own sound and its own creature.

Dead Rhetoric: There are a few interludes on the album – what planning goes into where to place them?

OncetheSun: There really wasn’t any planning…. Everyone had an idea for an interlude or intro… Josh wrote the Intro (“A Startling Revelation”), Anna wrote “Infinite Release” and “Breathless” that was all Nick. It all just really fell together pretty effortlessly and we are really happy with the outcome.

Dead Rhetoric: Could you explain a little about the cover of The Ghost inside Me? What brought about the limited edition color variant?

OncetheSun: The cover art is done by our good friend Alexander Jansson. He is a very well-known mixed media artist in Gothenburg, Sweden. We have worked with him for the last 3 albums. When we contacted him with our Ideas for The Ghost Inside Me this is what he sent us back. We always like to let people develop their own interpretations behind the meaning of the cover art. The Green cover variant was done only on the 1st run of CDs. The Limited Edition CD has a remix (courtesy of our guitarist Nick’s trip hop project Endless Blue) that will only be on this 1st run…. Our way of saying THANK YOU to everyone who came to shows and supported us.

Once they are gone, that remix goes with it. It will never be online. It is our gift to our core group of supporters and some of the new people who have discovered us at shows during this cycle, something they can have that no one else will. We are already on the 2nd run of CDs and have only a few of the limited ones left. Once they are officially gone we will start selling physical copies of the “Regular Version” online alongside the digital. On the other side of things we are getting a few new FREE remixes ready for our bandcamp page, to give new listeners and old fans a like a little bonus too.

Dead Rhetoric: On your Facebook page, it’s noted that you are already working on new material. What can we expect sound-wise or is it too early to tell?

OncetheSun: It’s definitely darker… We think people are in for a real treat… stay tuned!

Dead Rhetoric: What are your long-term goals for OncetheSun? Would you ever consider signing to a label?

OncetheSun: Our long term goal is to get our music into the hands of as many people as possible, in as many countries as possible. At the end of the day, that’s all it’s about… having the ability to be part of the soundtrack to someone’s life. As for labels…We would consider signing to a label…pending it’s a good arrangement and it would not hinder the music and how we make it. Making a living playing music is the dream, but the reality is pretty harsh. So there are a lot of things to consider when signing to a label. We’ll cross that bridge when we get there again.

Dead Rhetoric: What are some of the challenges that you face as an unsigned act?

OncetheSun: We always get told “I can’t believe you guys aren’t signed”. Being signed would be great but like we said before it gets complicated. So being unsigned and trying to stand out against signed national acts is tough… People can be dismissive if you are an unsigned act, you know like you are just some garage band that won’t be there next week. The sense of legitimacy with the masses is an uphill battle. But how do you get there? How do you get mass recognition? Get signed (maybe)… How do you get signed? Mass recognition… creating a buzz… it’s a never ending loop. The music industry is a very different creature than it was when we started this over 10 years ago. One things for sure… We have outlasted many “signed” acts that we loved… and will continue to with or without a label.

Dead Rhetoric: What prompted you to move your discography to the Bandcamp site?

OncetheSun: Bandcamp is a great site. Really artist friendly you know? Our Drummer rarely buys music anywhere else. We have always had music on Bandcamp… but we have had a lot of requests for some of our older stuff that’s no longer available. So we put it up to give people the ability to listen to us from our 1st offering to our newest. That way they can see the growth and progression of the band.

Dead Rhetoric: Your guitar player owns a bar and your bassist is a county treasurer – what’s everyone else do outside of the band?

OncetheSun: Well as you said, Jason owns a bar Called Sir James Pub in Port Washington, WI… It’s a very big hotspot for beer enthusiasts, he has over 860 different beers on hand at any given time. Josh just recently won the primary election for Ozaukee county Treasurer…. He is running uncontested in November’s general election and we couldn’t be more proud of him!!! Sam is working on his Journeyman card in Machining, Nick is a computer/tech guru who works for a high profile Marketing Consultation Company, and Anna is busy keeping it real by fighting the man and keeping the thug life alive…or she is a spy, we haven’t decided yet.

OncetheSun: High energy. We bring it when we perform…. No slouching allowed! We put as much emotion into live performances as we do writing an album. We think we always shock people when we get on stage… they never know what to expect. But by the time we are done we always make a lasting impression.

Dead Rhetoric: What’s next for OncetheSun?

OncetheSun: More Music, More Shows, and reaching more people! We are trying to have a new EP ready by next summer. And hopefully we will be doing another interview with you about that album too! Thanks for checking us out! 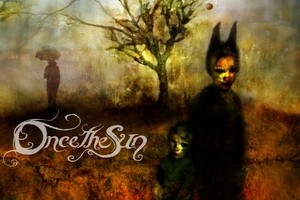