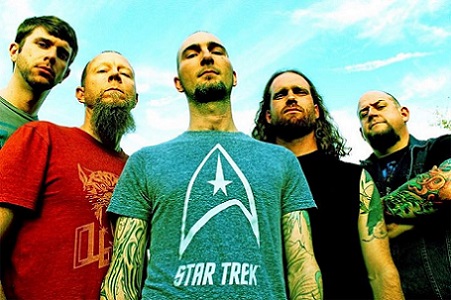 Comparatively speaking, what’s happening in Austin, TX at the present time is much like what was going on in the Sunset Strip of the 80s. Subtract hair-spray, spandex, make-up (for dudes), flyers stapled everywhere, and questionable song content, and what you have is a competitive, flourishing music scene in Austin, where for a band to make an impact, one’s “A-game” needs to be brought. If not, concert-goers will just shuffle on over to the next venue. Invariably, such high stakes will allow for the cream to rise to the top, but in this climate of short attention spans and option-overload, Austin can be considered one of the last true breeding grounds for bands to develop their craft.

Sticking out like a sore thumb (while developing their craft) is Dead Earth Politics. Playing a modernized brand of thrash-on-Maiden, the band has gradually built a dedicated fanbase among the more trendy and less-developed outfits who come to Austin thinking it’s their shot for the big time.

“Austin has always had a reputation for blues, rock and country & western, and its what usually comes to mind when people from elsewhere think of our fair city,” begins drummer Mason Evans. “The reality is that there no dearth of spectacular talent of all genres and mediums coming out of the ATX. Granted, much of it is obscured by peoples preconceptions of what “Austin music” is, but I can tell you, its there and it’s strong. I can also tell you Austin is no ‘golden ticket.’ So many bands from other cities, states and countries seem to have the perception that if they can get on the circuit here, they’ll be on the road to fame and fortune. Alas, that’s not the case.”

DEP, however, has enjoyed a nice run of local recognition, winning the Austin Chronicle’s Best Metal Band award. Such a feat was not taken lightly by the band. “One of our fans and supporters said at the top of his lungs in the street at SXSW: ‘Once is blind luck! Twice is a dynasty!’ To bring home this honor for two years running was humbling to say the least, and we’re all incredibly grateful to have such outstanding fans to propel us to this place!”

More pressing matters at the time for the band include their new Queen of Steel EP. Comprised of only three songs, the EP is a rather flexible concoction of Lamb of God-on-galloping melodic metal. The first official release from the band in over four years, the EP’s purpose was simple: To be short and sweet, or as Mason put it, a “kick in the nuts.”

“It’s very easy to get caught up in all the other parts of being in a band, the business, the interpersonal dynamic, touring and booking logistics, etc,” he adds. “Keeping great art as our north star, and being able to focus on that keeps in grounded in why we do what we do in the first place! In my opinion, all great artists create because they HAVE to, and to be able to share that with the rest of the chumps in this band is amazing. I think our audience gets that, whether or not it’s a conscious thing, and can feel that radiating outward in our records and live performances.”

Immediate plans for Dead Earth Politics include more live shows in and around Austin, as well as work on another short EP, which will eventually comprise of a full-length compilation. The release will also get the vinyl treatment, as well as be supplemented with band-branded bobble-heads, napkin rings, and toilet bowl scrubbers. “A must-have for the metal aficionado who likes a tidy, well-put together home,” says Mason. (We’re pretty sure he’s joking.) 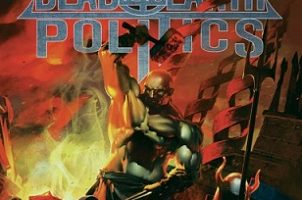 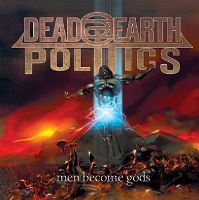