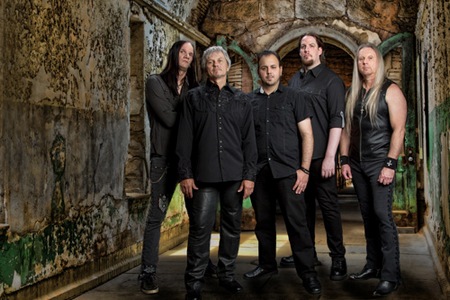 The Lone Star state traditionally has been a hotbed for hard rock and heavy metal – long before the Cowboys from Hell helped put it on the map, many others set the table on a local and international basis. From Helstar to Watchtower, Rigor Mortis to Solitude Aeturnus, you can expect every type of sub-genre to infiltrate its scene – as international bands like Saxon are able to pull in thousands to their gigs in Texas. Another quintet looking to make their mark in the melodic power metal movement is Millennial Reign out of Arlington.

Developing a platform that draws from numerous long lost guitar harmonies and soaring vocal melodies of the late 80’s and early 90’s US Metal acts such as Crimson Glory and Queensrÿche, sticking to their ideals through their brief two album career has made quite an impression on critics and fans alike. Enough so that European label Ulterium Records signed the band to release their new effort Carry the Fire. What may have initial begun as a solo project has morphed into a full on band – as guitarist Dave Harvey discusses in the following interview. Prepare to learn more about their decision to sign with Ulterium, special memories surrounding Kiss, Rush, and Iron Maiden, as well as Dave’s thoughts on the power / progressive metal genre as a whole.

Dead Rhetoric: Tell us about your earliest memories surrounding music – what influenced you to go from a music follower to starting a band, and what were some of the early hard rock/heavy metal artists you gravitated towards?

Dave Harvey: Kiss and Rush were the first two bands that I got heavily into. After listening to albums by those bands and seeing pictures of them performing live, I knew that that was something I wanted to learn how to do. My parents gave me a bass for Christmas and later my brother-in-law bought me an acoustic guitar for my birthday. It all just progressed from there.

Dead Rhetoric: Millennial Reign began as a solo project for Aska bassist Dave Harvey – at what point did things morph into more of a full outfit, and did you know right from the start the type of style/songwriting you wanted to go for?

Harvey: Millennial Reign started out as a recording project only. About half of the first album were songs that I and the drummer (Bryan Diffee) from a previous band decided to record. I wrote a few more to fill up the album and recruited a vocalist (Trae Doss) to write lyrics for the remaining songs and record vocals. Once I had written songs for the second album the first two guys were not available to record, so I recruited another singer and drummer. But as we were recording, conversation led to making this into a live band. We recruited another guitarist and bass player as things went along and had everyone we needed before the album was finished. The first album was more of an 80’s metal feel but power metal has always been my main focus since the mid 90’s.

Dead Rhetoric: Outside of the lineup changes from your self-titled debut to the new record Carry the Fire, where do you see the major differences in the two records?

Harvey: I think the writing has definitely improved since the first album. Not to mention Carry the Fire is more aggressive than the first album but still melodic.

Dead Rhetoric: Lyrically the band prefer to champion positive, uplifting stories that could be seen in a religious context. Do you ever worry about alienating certain audiences or do you think you leave enough open to interpretation?

Harvey: Not really, I think if someone doesn’t like the album simply for the lyrics then they probably wouldn’t listen to us anyway. We are not a Christian band per se, but James and I are both believers. So of course that will reflect in the lyrics.

Dead Rhetoric: What can you tell us about the cover for the new record – is this a collaborative process between the artist and the band, and how important do you view artwork in the overall scheme of things?

Harvey: The artist was Filipe Machado Franco, who also does work for Blind Guardian, Iced Earth and Theocracy. The concept was completely his, he just sent it to us to get input as he was working on it. I personally think it is very awesome artwork. And yes, I think the artwork is very important. You definitely want something that catches the eye of the metal fan.

Dead Rhetoric: You are now signed with Ulterium Records. Given the changing marketplace in terms of downloads and digital media, why partner with an outside label when most bands can do things themselves?

Harvey: An established label has much farther reach than a band simply using the Internet to sell their music. Of course working with the “right” label makes all the difference in the world as well. You definitely want a label that puts time into promoting their bands and cares about their musicians. Ulterium is every bit all about their bands and musicians… more of a friendship or even family, if you will.

Dead Rhetoric: At this point in your lives, how far do you want to take Millennial Reign as a career? Is it realistic to make a full-time living off of the band, or would you consider things more of an expensive hobby?

Harvey: The music scene here in the states will never be what it was in the 80s. The alternative grunge scene of the 90s and record companies killed good music and great musicians… it will never fully recover. So making a full-time living at this is not impossible but very improbable.

Dead Rhetoric: Who would you consider benchmark bands that everyone can agree with that fuels the band’s outlook on heavy metal? And how do you balance out fan expectations versus your own personal satisfaction for Millennial Reign?

Harvey: Well, from all the reviews that I’ve been seeing there have been mentions of Iron Maiden, Queensryche and even Crimson Glory. I can’t say that we were specifically going for that but there’s an old saying “wear your influences on your sleeve.” Being compared to any of those bands is a major compliment and my eyes.

Dead Rhetoric: I’ve read in previous interviews your love of Iron Maiden, Kiss, and Rush. Have you had the opportunity to see all of these acts live, and if so can you tell us some of your favorite memories?

Harvey: Yes, I’ve seen all of those bands live. Kiss’ Dynasty tour was one I will definitely never forget. I can remember everything about it from beginning to end. Seeing Rush for the first time at a young age and the sheer musicianship of all those guys simply left me dumbfounded. Iron Maiden is a bit of a different story when I saw them for the first time. They had just released The Number of The Beast album and they were touring with Point Blank and .38 Special. I’ve never been a southern rock fan so needless to say Iron Maiden was the only reason I went to that show. But I’ll never forget it nonetheless.

Dead Rhetoric: How do you view the state of power/progressive metal today – both from a domestic perspective as well as on a worldwide scale?

Harvey: There are a few power metal bands here in the states but nothing like outside of the country. I discovered progressive and power metal because of the musical void that was left here in the 90s. I spent a lot of hours researching what was going on in Europe and other countries musically. Once I discovered that power metal was the mainstream outside of the US I started ordering CDs internationally. A whole new attitude was born in me during the late 90s. I knew that power metal was the direction I ultimately wanted to go.

Harvey: We are living in very perilous times. I am ex-military and this country has all but gone completely to sleep since 9/11. Our borders are wide open and we are being invaded by outside forces on a daily basis. Rough times are ahead…

Dead Rhetoric: Where do you stand on social media and instant communication for promotional purposes of the band versus the good old fashion face to face contact in terms of building the band’s profile?

Harvey: Social media has made things much simpler as far as reaching your fans for shows or album releases etc. Although, meeting fans in person and letting them know that they are greatly appreciated is very essential. A band with few or no fans will never last.

Dead Rhetoric: What are the plans for the next 12 months for the band as far live performances, video promotion, and other activities?

Harvey: We’ve been booking one small show a month since September just to get used to being on stage together. Our next one is in Houston on November 21st at Acadia. After the first of the year we hope to work more closely with Ulterium on setting up some shows with our label mates Theocracy here in the states. Ultimately we plan to go to Europe for short tours and festivals. I’ve even already begun writing music for the next album. Hopefully we’ll have a new album ready by the end of 2016 or early 2017. 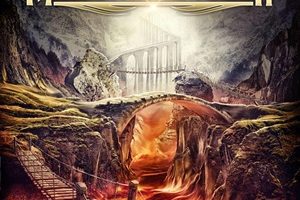 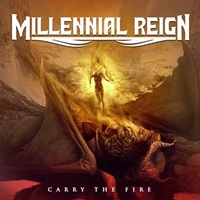