Now we take a look into 2003- a memorable year in my life due to my oldest daughter Paulina becoming a member of our family. It didn’t mean that my metal activities curtailed in the least- you could start to sense a stronger shift though in online writing from in print magazines. The world and information in general could move at a faster rate as more people would be connected with larger servers, DSL/ cable connections, and social media starting to play an important role to keep abreast on all the latest metal happenings.

Myspace would launch in the summer of 2003- and many metal bands caught wind of its ability to connect fans through uploading streaming content of their recordings, keeping people in touch with news and all their latest tour dates. Here are some albums that a mere 10 years ago hit your record stores far and wide yet maybe didn’t cut the mustard while you were taking in copious amounts of Opeth, In Flames, or Shadows Fall material.

Cage – Darker Than Black (Massacre Records)
California’s Cage felt the time was ripe for digging a little deeper into their traditional/power metal template, delivering a third album with Darker Than Black that contained more extreme screams from vocalist Sean Peck that appear to come from a black metal background and a slightly progressive, evil tone musically. Standouts include “Chupacabra” and the double bass twister “White Magic.”

Draconian – Where Lovers Mourn (Napalm Records)
These Swedes spent nine years refining their lineup and craft – spitting out four demos and an EP prior to issuing this debut full length. As far as gothic/doom metal is concerned, opening with a 12:45 epic like “The Cry of Silence” signals aural ecstasy, narrative and melodic singing wrapped around echoing chords and beautiful pacing. A snappy snare and dynamic contrasts carry the rest of the album – imagine My Dying Bride if given a symphonic meets extreme vocal influence, and that’s close to what you can expect on Where Lovers Mourn.

Hammers Of Misfortune – The August Engine (Cruz Del Sur Music)
Defying categorization, the sophomore album from San Francisco’s Hammers Of Misfortune (pictured) connects on so many levels. Analog recording + superior musicianship and smart songwriting construction = material that sounds as fresh now as it did ten years ago. “A Room and a Riddle” has the twin guitar harmony charm with Megadeth-style thrash riffs, “Insect” is a thrilling Voivod meets Psychotic Waltz roller-coaster ride- and at 11:11 “The Trial and the Grave” is doom de excellence personified. If you’ve missed out on this stunning band, start here.

Katatonia – Viva Emptiness (Peaceville)
Debate reigns supreme as to how ‘underrated’ this is. The sixth full length from Sweden’s Katatonia pushed their sound sonically to depressive heights rarely experienced before in the metal community. Hypnotic melodies at times, melancholy while also being angry, songs like “Ghost of the Sun” and “Will I Arrive” stir the soul, creating a lifetime of memories to the good. The best metal in my opinion provokes, inspires, illuminates, and promotes a kinship. Viva Emptiness fulfills on all fronts.

Lyzanxia – Mindcrimes (Reality Entertainment)
While other French acts sought out power/ symphonic pastures, guitarists/ brothers David and Franck Potvin prefer to create memorable melodic thrash metal with bite. Their second album Mindcrimes left me speechless, the right riff-tastic taste with supreme cutting and slicing shifts and the dual melodic/ sandpaper screams to keep listeners on edge. Imagine the strong rhythm guitar sense of Metallica and Heathen with the staccato and harmony shifts of say Meshuggah or early In Flames and that will clue you in to Lyzanxia’s strength and durability. “Time Dealer,” “Mind Split,” and “My Black Confession” have me air drumming/guitar strumming as I type… 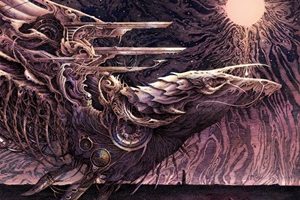