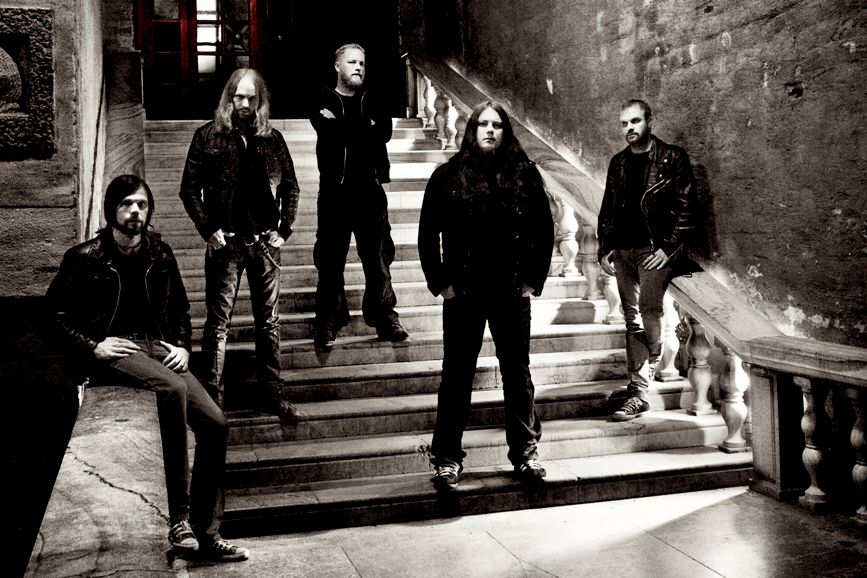 The “anti-frontman,” Katatonia’s Jonas Renkse doesn’t milk for crowd participation. He doesn’t inspire mass clap or sing-alongs. And he barely moves onstage, preferring to bob back and forth, swaying from side-to-side. This of course, is in perfect concert with Katatonia’s music – it’s meant to move you from the inside, not elicit mass pandemonium. Had Renkse turn into any other type of lead singer, it might shed that overbearing cloud of darkness (there’s that word again) that hovers above the band’s music.

If anything, Night Is the New Day is Renkse’s finest hour. He’s more assured, yet covert, preferring to let his sinewy croon guide mind-bending gems like “Onward Into Battle” and “The Promise of Deceit.” Lyrically, he’s all over the map, off the grid, cryptic and loose. Album closer “Departer” leaves a lot to the imagination (who is he talking about?) and that’s up to you and I to decide. Therein lies the allure of Renkse’s role as vocalist/primary lyricist – the mask and identity of his work will never be revealed, striking the ultimate barrier between poet and listener. And to think, ten years ago the man was struggling making the transition from drummer to Robert Smith-derived crooner to full-fledged frontman…

Blistering phoned Renkse on a mid-October afternoon to discuss the new album and what it means to him and the usually reserved Swede gushed over Night Is the New Day. We can see why, but we also wanted to pick his brain on his development as a singer, the band’s continued focus on North America and his thoughts on five unheralded Katatonia gems that deserve to be recognized. Here’s how it went down…

Blistering.com: What’s your general feeling toward the release of Night Is the New Day? Nervous? Excited?

Jonas Renkse: I think, most of all I’m really excited because I’m so happy with the album. I couldn’t be more satisfied with it. I’m looking forward to its release and all the things that go with it like going on tour and seeing people’s reactions.

Blistering.com: Initially, there were reports of you and Anders [Nystrom, guitars] not being able to choose the direction of the new material. Care to elaborate?

Renkse: I think Anders was having problems coming up with new material – he had writer’s block. I had been gathering ideas for music ever since the release of the last album. What happened was, when Anders didn’t come up with anything, we started working on the music that I had written. Eventually, we found the direction that was very much Katatonia. I just think it was unusual for Anders to be not as creative as he’s used to be.

Blistering.com: What did your input do in terms of the musical direction of the album? Also, how does the working relationship between you and Anders function?

Renkse: Yeah, I can only do the kind of music I want to hear. Me and Anders have a different way of writing, but we strive for the same goals. It might sound different on the way there, but I think Anders is very happy with the album. It’s a bit different and that’s what we needed to do at this point. I would say our relationship when it comes to new music is fluid…we don’t argue much. We might have different each opinions because we know each other so well when it comes to what we want to do the music and everything around it. It’s a very creative process…I would say that most of the time we end up where we want to be.

Blistering.com: Going into Night Is the New Day, were you looking to build off The Great Cold Distance or add some new wrinkles? Any pressure given how successful the last album was?

Renkse: Of course, some pressure was involved, mostly from ourselves because we were really satisfied with The Great Cold Distance. The album being a success, you want to continue off of that, but I think we built off the foundation from The Great Cold Distance and wanted to do something that subconsciously, became more progressive and that wasn’t something we intended to do, but the songs kept growing and kept taking different twists and turns. I would say the foundation is there from the last album, but the new album is more varied and layered.

Blistering.com: My stance is the album is more atmospheric and dark, so does that help or hurt when thinking about them for the live setting?

Renkse: If we can pull it off…we have used a lot of keyboards on this album. We had used keyboards, but not as much as on this record. We brought in a friend who we worked with before who did keyboards arrangements on “Unfurl” [a b-side from The Great Cold Distance]. We wanted to work with him for the whole album this time and it ended up being very creative; very big sound coming on the new album. We have to figure out how to recreate that in the live situation. It’s going to be difficult, but we’ll get there somehow.

Blistering.com: In terms of touring, will North America still be a place of focus?

Renkse: Oh yeah…we recently did our first tours in North America and for us, those tours were a total success because we could finally see the people that had been waiting for Katatonia for a long time. We didn’t expect that type of feedback. Absolutely, it’s much more faith in doing tours since there’s a demand for us. It’s perfect; it’s such a huge market and it’s fun to go over and play.

Blistering.com: Plus, it can’t hurt that you’ve remained a priority for Peaceville, who are willing to send you over. Is the relationship still strong?

Renkse: It’s working out better than ever. I’m very happy with Peaceville at the moment. We had some down years with them in the beginning, but I would say they have shaped up and are the perfect label for Katatonia at the moment. We’re not on a label where there are hundreds of bands. Peaceville doesn’t have a lot of bands, which means they can do longer promotion for every record they release. It’s a perfect condition for a band like us.

Blistering.com: Is there ever any temptation to revisit the sound ofBrave Murder Day or your early years?

Renkse: There is one song which is going to back to our roots, not including growing vocals, but it has the same kind of feeling that got us when we started the band. Or should say which made the sound of Katatonia back in the day. That song is “Nephilim.” I’m really proud of that song because it’s going back in time a little bit, but it feels very fresh; it’s not like we’re doing it to please the old fans. It’s very…it has its own place on the album and fits very well with the other modern songs.