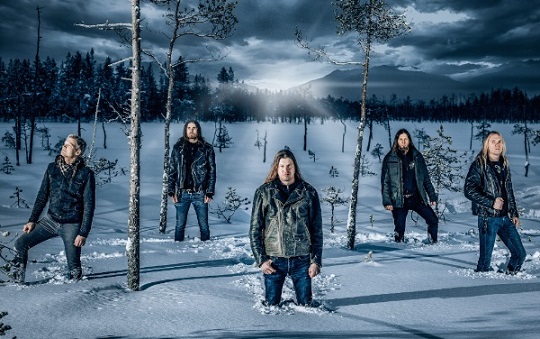 A brief, minor factoid about this scribe: He’s owned a Kalmah shirt since 2010; it’s the one issued en masse after The Black Waltz with the band’s logo big and bold on the front, and their ever-faithful “Swamplord” manning the back. Metal shirts, unfortunately, aren’t prone to withstand repeated washings, eventually become torn and tattered, shrunk and unwearable. Not this Kalmah shirt, though. After more than eight years of ownership, it fits as snug as ever, often drawing compliments from metallic passer-byes who recognize the band’s greatness.

Perhaps that’s some kind of metaphor for the Finns’ longevity, who, after forming out of the ashes of Ancestor, have reached the 20-year mark. Their brand of aggressive, if not sometimes symphonic melodic death metal has aged remarkably well, in particular, 2002’s They Will Return, which remains their crowning achievement. And it’s not like the rest of their discography can’t hang; 2008’s For the Revolution and 2010’s 12 Gauge are nearly as titanic, offering sprawls of melody and might, all under the steamy, foreboding conditions of the swamp, the band’s longtime source of inspiration.

The year brings Palo, Kalmah’s first album in five years. A better album than 2013’s  Seventh Swamphony, Palo finds the Finns busting out their trademark melo-death blend as if their career depends on it. But, as you’ll find below, it does not, something lead guitarist/songwriter Antti Kokko was all too happy to discuss…

Dead Rhetoric: In the past, Kalmah has typically released an album every two or three years. But, Palo marks the longest wait in between albums. Can you explain why?

Antti Kokko: It was a bit of a mandatory break. Three of us moved to work in the Helsinki area and I had to build a new house for me and moved also back to my hometown in the Oulu area. So that took time. All in all, we had a bunch of shows during those years so we were not so dead. About two years ago, we decided to push things up again and started writing new material with the album in sight.

Dead Rhetoric: You’ve been a band for 20 years now. Where does Kalmah rank in terms of priority in your lives now?

Kokko: Kalmah has always been a hobby for us. I could imagine with the first album when we were youngsters, we could have tried to make it [as a full-time band], but the album did not get wings so to say and there was no real chance to get it rolling in terms of, for example, tours. We didn’t get any offers and on the other hand, as the success was not so great the label put efforts toward bigger artists which is totally understandable. But on the other hand, success has grown with every album and I think at the moment and especially after the release of Palo we are again on a bigger level, so you never know what can happen in the future.

Dead Rhetoric: Speaking of which, what do you remember most about the early days of the band?

Kokko: I guess finally getting the record deal after five or six demos. We recorded a three-song EP and got it through for a listen to Spinefarm Records. After a few weeks, they sent me an email and requested more material. We ended up at a rehearsal room and recorded two new songs we already had for a cassette in the good old-fashioned way, a.k.a., push the “record” button on the cassette player and play live. After those songs, the label guy signed us.

Dead Rhetoric: Do you ever revisit your Ancestor material? And, would you ever re-release any of it?

Kokko: Actually, we have pretty much released Ancestor material on every album. We kind of strike back because we often think the material is way good enough for a real album. And here we are now, re-using those melodies and riffs for every album. Anyway, each album may have one or two riffs or some piece of melody, so, not much. For this album, the opening riff of “Evil Kin” is taken from the very beginning of our carrier in 1990 or 1991. I gave it a little twist and here we go putting it live in Kalmah form almost 30 years later and nobody notices anything…weird.

Dead Rhetoric: Moving along, Palo, to these ears, sounds more focused and direct than Seventh Swamphony. Was the songwriting process an easy one this time out?

Kokko: It was pretty much the same as usual. Some songs took months to get to the final form and some songs were written in an hour or few days. I always trust the inspiration. If I don’t have a good mood going on with it, then I just rest the case for a couple of weeks. Then on an inspiration burst, usually the material comes up pretty easily. I already had one or two songs about ready five years ago but as I said, we had real life things going on and it took longer this time to have all material for a full-length album.

Dead Rhetoric: What was the overall goal when putting together Palo?

Kokko: There was no certain goal. But we always want to make our best and decided as always that only really good songs will go through. Therefore, I dumped three or four songs during the last five years.

Dead Rhetoric: You’ve long had lyrics and themes about swamps. How are they represented this time?

Kokko: At least in the songwriting process like the beginning melody from “Blood Ran Cold” is written in my head while picking cloudberries on an early morning in a swamp. The album cover, of course, represents the broken scenery which forest machines do here and that reflects the special swamp ecosystem such as its fiona and fauna we have here.

Dead Rhetoric: As climate change continues to destroy the world, what are your thoughts? Does it inspire your lyrics at all?

Kokko: I believe there is some text about that as well, but especially from the main factor behind climate change which is a man. It is all about greed and more money they want without thinking about nature and other people at all. That seems to be the way of Finnish politics at the moment as it seems to be the way all over the world. We end up in shit unless something radical happens and make the decision makers leave the personal profit and greed behind.

Dead Rhetoric: The Finnish metal scene has grown exponentially since you started. Where do you see Kalmah fitting in, if at all?

Kokko: Yes, it has grown but for me, it has now gone downwards for the last ten years. Not the fact that new bands are emerging all the time, but the quality of the music has gone backward. There is nothing inspiring and new coming up. Some good artists now make pretty lame albums yet still seem to grow their success outside Finland. I think we do have a good solid place there between them all and actually, we do have a good audience here.

Dead Rhetoric: You’ve enjoyed success in Canada, but you haven’t done a lot of shows in the United States. Are shows here ever in the cards?

Kokko: Actually, we have never played on U.S. soil. The closest one is the 70,000 Tons of Metal cruise and Canada. In Canada, we have had lots of people from the U.S. coming to hear us and that has been nice. The reason we haven’t been there is simple: We haven’t got any decent offers. We sure would like to play there because I know there are lots of listeners and fans.

Kokko: We have release shows here in Finland coming up after the album release and then some negotiations about shows all over the world, but nothing is sure, yet. I believe next summer I’ll start to concentrate on new material. Of course, after the release, there must be some time to enjoy the release and five years work.