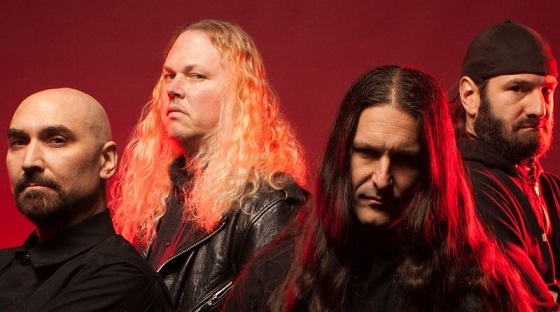 Death metal vanguards will no doubt look upon 2017 as one of its best years since the style’s glory days, which would be anywhere between 1990 and 1994. Get past those years and it’s saturation beyond repair. But, here in the now, the classic death metal bands are alive and thriving, including Immolation, who to these ears and many others, is the most unique of the bunch. Even though their career was jumpstarted by their 1991 Dawn of Possession debut and 1994 Here in After follow-up, it has been their recent output that has solidified the band as one of the most creative and forward-thinking in death metal. Their new Atonement certainly aids in that discussion, emerging as one of Immolation’s most twisted yet digestible albums to date.

The appropriate critical acclaim followed, which the band has ridden into some prime touring slots, including their fall 2017 run with Norwegian black metallers Mayhem, which is when we caught up with guitarist and primary songwriter Bob Vigna. The bald-plated axe-man was all too happy to discuss the year that was, the band’s career, his relationship with bassist/vocalist Ross Dolan and more. Read on…

Dead Rhetoric: 2017. Between Atonement and its various accolades along with the touring behind it, would you say this has been Immolation’s best year?

Bob Vigna: I think so. It’s our busiest. The last record [Kingdom of Conspiracy], we loved the way it came out. There’s certain aspects of the production that obviously we fixed with this record. Musically, I loved the last record and thought we didn’t have enough tours for it. We toured once in the States on the Decibel tour with Cannibal Corpse and Napalm Death. That was pretty much it. Then there was a Europe tour or two with Marduk, but very spaced out. We did some cool stuff like going to Australia and New Zealand for the first time, but yeah, we just didn’t do a lot of touring. This one, I think things came aligned a lot better with everything. Musically, I think it’s better, darker, heavier, atmospheric-wise with the production, Zack Ohren definitely got a better idea of what we’re looking for this time around. From what he heard from the last record, he kept that in mind. He made sure the drum sounds were more on point, just all the production came out that much better. It was just one of those, finally, this is the fourth release we’ve done with the Paul Orofino/Ohren team, so he’s gotten better and better and he finally nailed it on this one. He definitely knows what we’re looking for. We’re happy with everything. It’s been a good year. Probably the most touring we’ve done since our second record. It’s going to continue on into the next year. March, we’re going to Europe. April, we have South America in the works. We’re trying to do the States in May, maybe do another support run in April or May or May/June, then we plan on doing Europe again then the U.S. again, probably headlining to celebrate our 30th anniversary. We want to do a tour for our 30th anniversary, do a nice tour for it.

Dead Rhetoric: If I asked you 20 years ago…

Dead Rhetoric: Thinking back to the late ’90s when everyone was just tired of death metal, yet, no one really tired of Immolation.

Vigna: For us, it’s obvious, we’ve been just ongoing and doing our thing. All types of music seem to have their ups and downs. Look, when we started it out, that’s when it was all hitting big. It was new and it was fresh. Obviously, things changed, but now, it’s been more of a resurgence the past year or two. The heavier music is getting more into the spotlight again. It’s good. We see it. The younger kids are coming out to the shows. The interest is there. For us, every record has gotten better for us. It’s always gotten better since we signed with Nuclear Blast. Things got better and better for us. And we got better with our writing and production, so it’s helped us a lot. For us, we’ve always been there. [Laughs] We’ve been doing our thing and trying to make it better.

Dead Rhetoric: If you think of the core classic death metal bands, you may be the weirdest with the way you write riffs and structure songs.

Vigna: I don’t think our stuff is that crazy. All right, the earlier stuff was a little bit off the wall, but not much as when I go back and listen to it, it’s not that off the wall. I think we’ve gotten to a point now with the last record, yeah, there’s a lot of stuff going on. It’s more laid out. It’s more of a basic layout more than anything else. People always call us a technical band, but we’re not really technical. We’re very un-technical as far as I’m concerned, but we do things that people wouldn’t think of doing. As for us, we’re trying to expand and do different things. Make the music darker, heavy, but compact and straightforward as we go. We just get better at what we do as we go. For me, it’s about getting better at writing and making the music easier to get into and better for a live setting. We could play this whole record live. For us, we’re constantly trying to improve ourselves and make good music. We’re still ambitious, hungry and we enjoy what we do. We’re excited about every record and every new song. Every record, we’re like “We’re happy with this.” So far, we still have that fire, that spark, that interest in the music. It’s not run of the mill. It’s not a job for us. We genuinely enjoy it.

Dead Rhetoric: Since you’re the riff writer in the band, when do you know you have a good one?

Vigna: It’s just a feeling you get out of it. Usually, I’ll write a riff, I’ll figure out a timing for it and I come up with something for it, no matter how basic, if it sounds interesting. I’ll get a metronome to it on the computer, I’ll record the riff, then double up on it. Then I’ll try the drums and try to figure out what beat goes with it, then I’ll lay that out and make drums for it. After that, it goes to the side and I work on the next thing and eventually start putting together [more riffs] and adding stuff that needs something else. You know, I’ll record a few things and I’ll go back and listen to them: “Okay, that’s a fail. That just sounds like that. That’s a fail.” You listen to it, “Yeah, I thought it was good, but it’s the same thing as that and before.”

Dead Rhetoric: That has to be so tough with nine or ten studio albums.

Vigna: With this record, I thought the album might need something else, then I realized we were at 99 songs in our career. This is the tenth album, I have to write another song. I had this one riff. I’m like “This riff feels like it could be a main part of the song. It’s got something to it that I like.” I knew I could write something with it and it took me about seven different passes and changes and it turned out to the be the last song on the album, “Epiphany.” I was happy about that. We pretty much hit our 10 records, 100-song mark. But yeah, you know there’s a riff. For that one, I knew that was the riff to start off the song, I knew it was something. It’s a matter of what you do with it and you make it work in the song. We enjoy the process, we enjoy the writing, we enjoy the touring. For us, this is the fun part is being out here with the bands and the crew and having a good time. You get on the road, meet the fans, do the shows, that’s the best part. I don’t mind the other aspects of it, but this is the best part of it for us.

Dead Rhetoric: You and Ross have been in Immolation since the beginning. What’s the relationship like between the two of you?

Vigna: We’re like brothers. We’ve known each other since probably before the band started. We go back to 85, 86. He would come down to our rehearsals and we used to hang out with similar friends. We all liked that kind of music. Underground music in Yonkers at that time, when someone was into it and you knew there were into it, it was “Whoa, he’s into it!” It wasn’t that popular. There was no Internet, so everyone stuck together. We had all mutual friends and we would hang out a lot and go to the shows. Once the first band ended, we knew Ross was into playing and we asked him and that’s it. We went from there. Yeah, we’ve known each other for years. We’re like family. We’re basically like brothers. It’s a great relationship. We’re both on the same level of what we want to do with the band and want to achieve. Personally, things we believe in and the way we look at things. We’re definitely on the brother level like no other.

Dead Rhetoric: There’s a very strong current of nostalgia within the death metal scene these days. Would Immolation ever take the bait and play one of its albums in full like Here in After?

Vigna: Definitely not that record, no! [Laughs] Honestly, nostalgia, for me, it’s cool for two seconds. “Oh, remember that time when it was cool and the music first started and we writing letters?” That was awesome. But, I don’t ponder over it. I don’t sit there…for me, you ask me what’s my favorite time of the band? Right now, this second. That’s the way we are. We look forward, we don’t look back. As far as I’m concerned, you’re only as good as your last record and it better be a fucking good record.