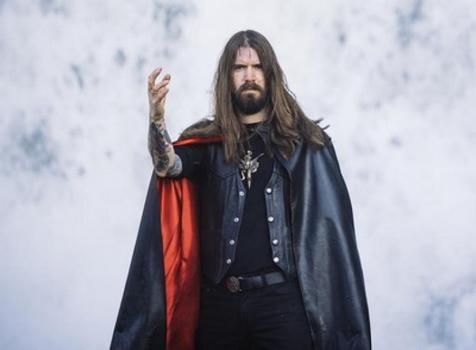 Erlend Hjelvik, probably best known as the former vocalist of Kvelertak, is forging a brand new path with his new band, aptly titled Hjelvik. Featuring a wide swath of varied influences into the band’s sound – with reaches across the metal and rock spectrum, there’s an excitement and energy to it that is sure to intrigue fans of his previous work, as well as a brand new slew of metal fans. Welcome to Hel hits a sweet spot of metallic and rock spectacle with enjoyable Viking inspirations. We reached out to Hjelvik to get some more information on this debut and concepts surrounding it, as well as discussing some things he’s learned and goals he’d still like to accomplish.

Dead Rhetoric: What was your goal in creating Hjelvik?

Erlend Hjelvik: I guess the goal was to make music that I personally liked, and would be fun for me to sing on top of. That was the main motivation.

Dead Rhetoric: Being that this is a fresh start for you, how do you describe the sound that Hjelvik has?

Hjelvik: I’ve called it ‘blackened Viking heavy metal.’ That’s just the term that made the most sense to me. On the album, there’s a wide variety of influences. There’s black metal, thrash, classic rock, and heavy metal influences. So I think heavy metal is the base that covers it all. You can called it blackened because of the influence of my vocals, and Viking because of Bathory Viking-era influences and the lyrics are about Norse mythology and history.

Dead Rhetoric: There’s a censored and uncensored version of the video for “North Tsar.” Was that because you were trying to get around restrictions with various sites?

Hjelvik: That’s more of a label thing [laughs]. I think they just want everyone to be able to see it. It’s a lot more restricted – you have to be over 18 or something. But I’m happy that we have two versions. I’m happy that we have the uncensored version on our channel too. People can see whichever one that they want to. I think both of them are good.

Dead Rhetoric: Could you go into the lyrics and Viking mythology on the album?

Hjelvik: The album is a loose concept – it’s mostly focused on death, and rebirth too in a way. There are some songs focused on Hel, and there are songs more based on Odin, and then there are some songs that are based on Norwegian history. “Necromance,” for example, is based on a story from Harold Fairhair and how he fell in love with a Sami princess. She died, and then he was possessed by her corpse. She had some sort of spell on her and he was hypnotized by the corpse for several years before the curse finally lifted. There’s lots of crazy stories that tie into it with both mythology and history.

Dead Rhetoric: Anything you can say about the cover art?

Hjelvik: It was made by Joe Petagno, who has also made the Motorhead logo and a bunch of covers for them. He also did some work for Led Zeppelin and a bunch of other black metal bands like Marduk. He was on the top of my list when it was time to choose someone to do the cover. Luckily, he was on board and he lives in Denmark now. He’s really into Norse mythology so it was really easy for him to make a cool cover based on the lyrics and things like that. He told me that the concept came to him in a dream, and that’s when he showed us the sketch with the sword and the hammer and the wolf and world serpent. I think it is really cool because it kind of encompasses everything I sing about.

Dead Rhetoric: Do you feel it’s important to have that kind of a striking image to really grab people?

Hjelvik: Definitely. I feel like I really lucked out with what he made for me. I couldn’t have asked for a better first cover. It’s all kind of there, and something we can keep using throughout with the cool crest that he made.

Dead Rhetoric: How’d you end up with Nuclear Blast?

Hjelvik: My manager reached out to Nuclear Blast once we had the album was recorded and it all worked out. It was kind of easy – they were on the top of our list and thankfully they said yes right away.

Dead Rhetoric: What’s exciting for you about starting a new band, and new chapter in your life?

Hjelvik: Getting into the cycle and doing interviews about the album now – my wife [his manager too] and I are doing a lot of work at the moment. She’s setting everything up a lot of things and I’m doing a lot of interviews. In Norway, we are releasing it on our own label, so there’s a lot of work involved with that too. It’s been going great, and we’ve been getting a lot of really good feedback so it’s an exciting time right now. It’s a lot of fun.

Dead Rhetoric: What are some of the challenges about restarting, particularly with the world in the shape that it is in now?

Hjelvik: I’d say starting from scratch, but I have put out a number of albums before. But in a way, I do still kind of have to start from scratch in terms of building up followers on social media and all of that. A lot of work goes into that too. That’s one challenge I would say. But you have to take it one step at a time. It’s challenging with the Coronavirus, because it would be nice to go out and tour and really promote the album that way – it’s really the best way to promote your music. But that doesn’t work now so we are doing the best we can from home. I’m kind of thankful too because it kind of allows us to focus 100% on putting the release out the right way, instead of being distracted by practicing and that sort of thing. But I’m looking forward to when we can start touring, hopefully next year.

Dead Rhetoric: With the sound of the music, do you feel that not going out on tour gives you more opportunities to showcase the music in some other ways?

Hjelvik: Yeah, it kind of feels like you just have to make the best of the situation. You try to make great videos and keep the social media stuff interesting so people are engaged. You do what you can.

Dead Rhetoric: There is that one part of the band with black metal-esque aspects. What are your thoughts on the malleability of black metal?

Hjelvik: Black metal is really vast. There’s so many different types of black metal within the genre itself. If you look at band like Venom and compare it to Dimmu Borgir, it’s totally different. It’s pretty easy to take a piece out of any kind of black metal and make it work. For me, it’s one of my favorite genres, so its going to be there no matter what even if my music isn’t overtly black metal at all.

Dead Rhetoric: Is there anything from your time in the industry that you’ve kind of learned or taken to heart from other bands?

Hjelvik: If I’ve learned anything, it’s important to put in the effort. Personally, for me, I wish I wasn’t on autopilot before and took charge of more things. That’s the lesson I have learned, so know I’m diving in 100% – I’m 100% focused and doing everything the best that I can.

Dead Rhetoric: Do you feel its easier with this too, in designing your own band and shooting for your vision?

Hjelvik: Definitely. I write all of the lyrics and music myself, so I don’t have to make any compromises. So it’s 100% my vision of how I think things should sound. That’s a nice change for me.

Hjelvik: Right now, I would just like to put out a couple of really great albums. That’s my goal. I want to go out and put out some awesome heavy metal shows that people are going to remember. Those are my main goals at this point.

Dead Rhetoric: Are there any plans outside of the album release?

Hjelvik: We are going to start to get ready for touring, so that we are ready when it opens up. Hopefully sometime early next year. We’ll see how that goes. We are going to build a practice stage in our house so we can practice at home before we hit the road. I guess that’s the next thing once the album is actually out.