Doro – No Fear, Not Ever 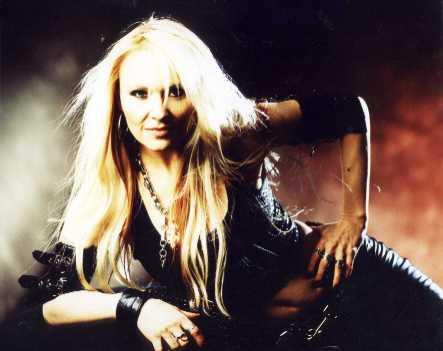 Dependable Doro. She’s been rocking the house for over 25 years now and as cliché as this sounds, shows no signs of slowing down. Her newest Fear No Evilis another solid slab of classic metal that showcases the blonde bombshell’s fiery vocals and boasts some killer guests appearances from former Nightwish siren Tarja Turunen and a throng of Euro metal all-stars including Biff Byford from Saxon, Angela Gossow from Arch Enemy, and Floor Jansen of After Forever.

True to her nature, Doro was as kind as they come, so Blistering gladly sat back and let the German metal queen do the talking…

Blistering.com: At this point in your career, how exciting is it for you to be able to keep putting out albums?

Doro: It’s exciting and an honor! I know it’s being released worldwide again and I always have enough ideas to do 10 more records. I’m always excited to write more songs. This one was extra special because we just celebrated the 25th anniversary last December in January. We were preparing for the show for a whole year, so I had a lot of ideas to do a record that represented the last 25 years, which we could play during the show like “Night of the Warlock” and “Celebrate.”

Blistering.com: What was the inspiration behind the album title, Fear No Evil?

Doro: It’s a line out of the song “Night of the Warlock.” When I sang it and when I wrote the lyrics, it was hitting me deeper than all of the other songs. I thought it was a good title, but in the end, we messed around with different [titles], but this one was the best. It has a good message behind it: don’t fear anything, just do it!

Blistering.com: With “Celebrate,” you assembled quite the cast of characters. How did you go about assembling people like Biff, Angela and Liv Kristine?

Doro: Actually we wrote the song and then I thought it needed a choir. These people came from all over the world and we met in this rock club. Then we had a different group of people that sent tapes with just the men singing and just the ladies singing and I thought, “wow!” All of my friends in the music business are in it, like Sabina Claussen (Holy Moses), we grew up together and UDO I’ve known for a while, so it was very special. It’s probably the most exciting song on the record and quick

and easy to do.

Blistering.com: Another duet that turned out great was “Walking With Angels,” which Tarja (Turunen, ex-Nightwish) helped out on.

Doro: I met Tarja at Wacken in 2003 and I loved her voice. She’s such a great singer. The next couple of times, in fact the last time we met, we met through again through a mutual friend of ours at club and got to talking and were hitting it off and felt we should do something together eventually. A couple of months later when I was writing for the new record and “Waking With Angels” came out, I thought it would be a good song for Tarja [to do]. We performed it live at the anniversary concert and I think we’ll do it together at the Female Voices festival in October. We’re good friends

and she’s a very nice person.

Blistering.com: How much fun is it to be a part of metal festival season?

Doro: It’s the best, it really is. It’s the only thing in Europe I like more is the variety. You can go to tons of festivals. We played the Metalway in Spain with Warlock. Motorhead, Twisted Sister, WASP…everybody was there and now we’re doing a few more in Scandanavia, Russia, then we’ll do Wacken. We want to do all of the festivals in the states after we do our tour there in September. But yeah, I love playing the festivals and meeting everybody, seeing old friends. I love touring, but festivals are always a highlight for me.

Blistering.com: With a career spanning over three decades like yours, what goes into choosing a setlist?

Doro: I always try to choose the highlights of each album, usually the title track. “All We Are” from Warlock, always, and a few goodies from the new album, then we’ll let the fans call out the songs and we usually have something prepared for a 2 ½ hour show. From the new one, I think we’ll be playing “Night of the Warlock,” “Celebrate” and if Tarja is there, “Walking With the Angels” and maybe “On the Run.”

Blistering.com: Of all the experiences you’ve had in the industry, what type of lessons do you carry with you to this day?

Doro: When we started in the 80’s, it was so great when metal was getting bigger and bigger, I never thought it would tail off like it did in the 90’s. When grunge came in and it was getting so much support, the record companies turned it into a weird reality check. I always thought, I wanted to be happy with what I have, and be truthful, and I appreciate it much more now than I did in the 80’s. The record companies were supporting, you had big studios, big promo, and you think you’ll always go on like that, but in the 90’s, nothing worked. I like to have my feet on the ground again. It’s not going to last forever, so you appreciate every record and every tour. These last nine years have been great and everyday I treat it like they could be my last.

Blistering.com: You mentioned you’re going to be touring North American this fall. Do you plan on focusing more on this country? What are your goals here?

Doro: We want to put on the best shows we can put on. There are many fans who have never seen us and some youngsters as well. I know in Europe it gets a little tricky because they have shows for 21 and over, so the kids can’t just can’t go. But we want to please our old fans from the early part of our career as well. We want to hit the whole spectrum of 25 years of metal with lots of power and energy, emotional stuff, too. We want to give them something they won’t forget.